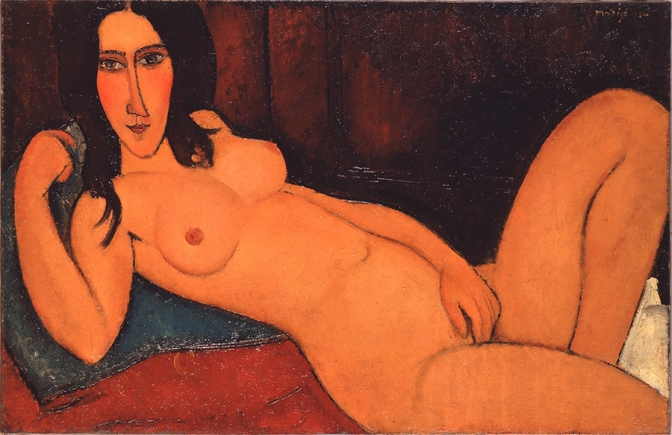 Only a very select group of artists make it into the art market top 40. Amedeo Modigliani (1884 -1920) is one of those blue chip artists. He currently has three paintings on that hit list of most expensive works of art. Two of them are reclining nudes and one is a seated nude. Make of that what you like. There can be few 20th century artists whose portraits are so recognisable. Modigliani struggled to sell his paintings during his lifetime but in today’s overheated market his nudes reach nine figure sums.

The Finnish National Gallery in Helsinki (which locally is known as Ateneum) has put together a marvelous retrospective exhibition with 83 of Modigliani’s drawings, sculptures and paintings.
Among the highlights are the sculpture Head of a woman (1911), Seated Girl with Dark Hair (1918) and the Reclining Nude with Loose hair (1917) . No points for guessing which of these women graces the giant poster on the façade of the museum.

The exhibition at Ateneum confronts us in the very first room of the exhibition with giant blown-up photographs of Modigliani ‘s muses, influential colleagues and bohemian friends. An interesting decision, which seems to set him up as a product of all these people that he came into contact with. And yet, neither his portraits nor his sculptures resemble anything his artistic friends and acquaintances were producing at the time.
Yes, there was a short Picasso inspired cubist period, but the single most important influence was Cézanne, who Modigliani never met. The lasting and greatest stamp on his work came from the regular visits that Amedeo would make, after moving to Paris, together with the sculptor Brancusi  to the Galerie Joseph Brummer , the Louvre and the Trocadéro museum. He studied in particular the Greek and Roman statues, the masks from the Ivory Coast and all kinds of sculptures and figurines stripped from Southeast Asian temples (like Angkor in Cambodia).
One of the exhibition’s best illustrations of how ‘classic’ sculptures influenced Modigliani is Head of a Figure of a Woman made by an anonymous artist between 2700-2300 B.C. This fairly typical early Cycladic head made out of marble is nothing more than an oval face with an elongated nose and just the slightest hint of where the eye sockets are. No mouth, no ears, just a little bit of the broken off neck. This early Aegean art together with the featured wooden Guro mask from the Ivory Coast comes very close to the essence of Modigliani’s art. In Modigliani’s portraits people seem to present a mask. He paints the art of trying to give away as little as possible. When it works it is strangely revealing.

We see Modigliani arriving at his own distinctive style fairly early on in his career and it is clear that his dabbling in sculpture plays a huge part in the development.

The exhibition displays a number of African and Asian masks and figurines that could have inspired him. There are also a couple sculptures by his friends Constantin Brancusi that do have something in common with Modigliani’s early work. It was Brancusi who encouraged him to sculpt. Modigliani’s Head of a Woman (see photo) does seem to suggest a female of Asian background, but I can’t make my mind up if her eyes are open or closed. No, they are closed. It is the ‘inner eye’ of the exhibition’s title.

Amedeo Modigliani grew up in the Italian port city of Livorno. Both his parents were Sephardic Jews and the fact that a great number of his sitters and friends were Jewish shows that he  cared about his heritage. When he was 16 he was diagnosed with tuberculosis which in those days almost certainly meant an early death. This also made him exempt from military service and he was not called up for war duty.  Amedeo attended art courses in Florence, Pietrasanta and stayed for three years in Venice. In 1906 he enrolled at the Academie Colarossi and moved to Montmartre. He stayed in Paris until the end of his life.

In 1914 Modigliani suddenly abandoned sculpture and decided to devote himself completely to painting. It is not clear why, because he showed great promise and even managed to sell some works. Perhaps he realised that some of the friends that he had made recently ( the likes of Lipchitz , Zadkine and Brancusi) were even more talented sculptors and his own dogmatic approach to the profession (he only wanted to sculpt out of stone) didn’t help. His precarious health was perhaps  another reason why he suddenly gave up sculpting. He simply couldn’t cope with the dust which is released when you chip away at a stone.

The Great War emptied many towns and cities of young men who were sent to the front. Paris had acted like a magnet on foreign artists but some now decided to join the Foreign Legion. Others like Picasso, Chaim Soutine simply stayed put. Modigliani was discharged for health reasons, just like Soutine. The two became good friends and shared many sitters for portraits.  A few of Soutine’s almost clownesque likenesses also feature here, but Modigliani’s restrained portraits are easily superior. In Modigliani’s portraits people rarely crack a smile but Soutine actually does look happy in one of the four paintings that he made of his friend. Very unusual as most of Modigliani’s models seem sad or melancholic, or simply bored.

In July 1914 Amedeo meets the English-South African poet Beatrice Hastings with whom he starts a relationship. She also becomes his muse. The war breaks out, but for Modigliani things are looking up and he starts selling works on a regular basis. Paul Guillaume becomes his dealer and Amedeo paints a very lively portrait of him wearing a fedora and smoking a cigarette. It is quite unusual for Modigliani because it seems to incorporate a sense of movement.

Between 1915 and 1918 he churns out the portraits. Many of them depict his friends who would pay him a little something and later sell them on for a handsome profit. I hazard a guess that many didn’t like the way they were portrayed.

During the war years normal life continued as much as possible and galleries continued to organise exhibitions. In 1917 he found a new partner, Jeanne Hébutene, who fairly quickly became pregnant. Alcohol abuse was taking a heavy toll on Modigliani’s health, the German bombs were starting to hit Paris and the couple decided in April 1918 to move to the Riviera.

Apparently he managed to stay off the booze for a while and he produced some of his best portraits. One of my favourites is the rather melancholic Seated Girl with Dark Hair (see picture). The painting doesn’t have the usual flatness and there is even some soft shading. The background is virtually monochrome, as so often, so as not to distract from her pretty face. She is not looking at us, her gaze appears to be directed at the artist and there is a  sense of genuine pity (for the painter!). It is a case of the artist portrayed through the sitter.

The portrait of the artist Leopold Survage (1918) is particularly interesting. He has that typical elongated face we associate with Modigliani, but one of his eyes is blank, devoid of pupils. Survage was a good friend and he asked Modigliani: “Why did you only give me one eye?” Amedeo replied. “Because you look at the world with one eye, while with the other you look into yourself”. Again, this seems once more to explain why this exhibition is called Amedeo Modigliani, The Inner Eye.

The absolute highlights , as far as I am concerned, are the nudes. Modigliani doesn’t depict shy women that avert their almond shaped eyes. No, Reclining Nude with Loose Hair (see featured image at top of the page) is as beautiful, self-confident and as uncompromising as Goya’s Naked Maja and Manet’s Olympia. In fact Modigliani’s beauty is much more in your face, occupying most of the pictorial space. It is all about her, and any back story (as with the Manet and the Goya) is irrelevant. This is where Modigliani was at his absolute best and that is reflected in the prices that his nudes nowadays command.

The Reclining Nude normally resides in a museum in Osaka and this is an unique chance to see a nine figure painting much closer to home. If the Ateneum in Helsinki is anywhere in your neighbourhood, hasten to see it. If nothing else, you can admire her likeness on the museum’s façade.

Modigliani died in January 1920 of tuberculosis meningitis. Two days later his 21 year old wife Jeanne Hébuterne, who was nine months pregnant,  jumped out of a window of her parents’ apartment and died.

Amedeo Modigliani, The Inner Eye, continues until 5 February 2017 at Ateneum in Helsinki