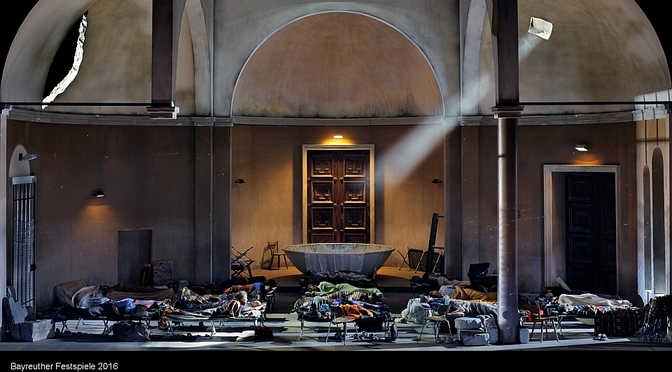 PRELUDE
I have a confession to make: I don’t quite get Parsifal.
It is not the music that is the problem. Some of it is exceptionally easy on the ear.
But the message remains mysterious and the metaphors can be confusing at times.A basic understanding of Christianity and its symbols certainly helps. Actually, it is absolutely essential that you have some knowledge of Christian rituals to appreciate Parsifal. But then again you expect a good director to make sense of the fairly convoluted plot. It is important to know that in Bayreuth’s Festspielhaus you get no surtitles and the programme books never provide a synopsis of the libretto.
When you come to Bayreuth you need to be prepared.
I thought I knew my stuff. To be honest I expected the director Uwe Eric Laufenberg to present a clear vision of Wagner’s Bühnenweihfestspiel.

Parsifal is the composer’s only opera that was specifically created for Bayreuth. Many composers from Mahler, Sibelius to Alban Berg were deeply moved by the work after seeing it at the Festspielhaus. Debussy, who in general was very critical of Wagner’s works, found “Parsifal.. One of the loveliest monuments of sound ever raised to the serene glory of music”.
In my previous blog I interviewed Haenchen and wrote about the sudden switch of conductors for the current production. Hartmut Haenchen took over from Andris Nelsons with less than three weeks to go with stunning results. It is no mean feat to prepare one of the longest and most complicated operas in the repertoire in such a short time. It helped, without a doubt that Haenchen could rely on the best Wagner orchestra in the world.
To cut a long introduction short: I was interested to see how the German theatre director Uwe Eric Laufenberg would resolve the various problems that Parsifal presents. 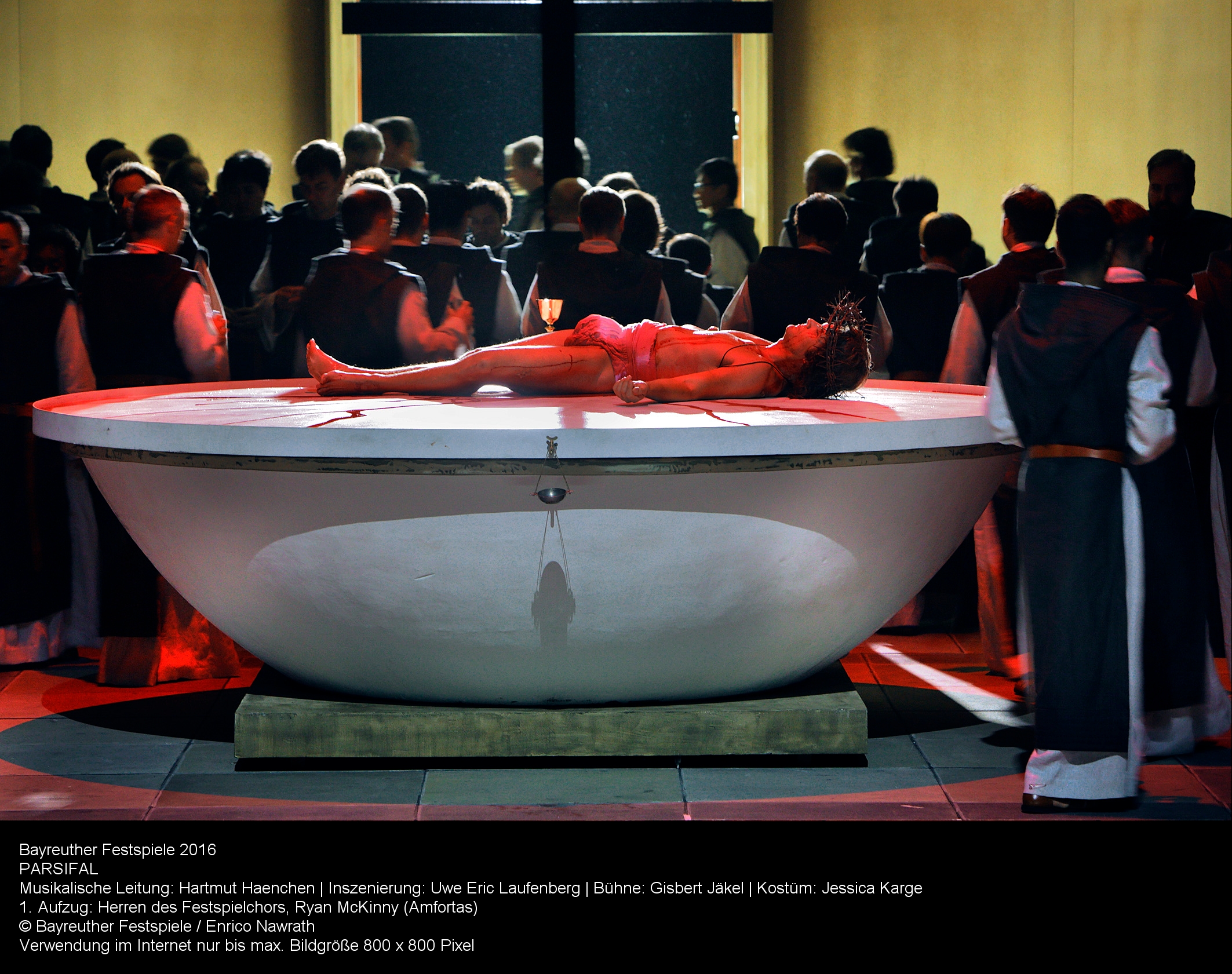 ACT I
The curtain rises on a bomb damaged catholic monastery or church that acts as a kind of night refuge. Its immediately clear that the director sets the action somewhere in the Middle East where Christianity is under threat. The Christians are forced to keep to themselves and their own community. Gurnemanz is dressed in a kind of woolly galabiya and skull cap and it makes you wonder if he is a Christian or a Muslim. When Kundry crawls in she is dressed in a hijab. OK, what is going on? This could be interesting.
There were rumours in July that this would be a controversial production.Security around the Festspielhaus was increased dramatically, bur the organisers denied that it had anything to do with the Parsifal production’s Middle Eastern setting. The real reason for the alert was that there had been several deadly attacks in July in Bavaria ( caused by a teenaged terrorist and a mentally disturbed person). The Festspiele are also very popular with politicians, celebrities and captains of industry and they needed extra protection. In this production there are some vague visual references to paramilitairy Muslim fighters, but there is absolutely nothing that could offend anybody from any religion.
With hindsight I wished that Laufenberg would have taken greater risks instead of going for therather predictable Christian monk experience in the second scene of Act I.
Amfortas is made to take his health spa bath in a massive bowl at the back of the stage. In the followiing scene the bowl becomes a stage upon which a crucifixion ritual is pérformed with Amfortas as the Redeemer. It is a bit of a yawn, but musically this Ceremony of the Grail sounds magnicent. Haenchen has drilled the forces to a level of perfection that is astounding in such a short time. Amfortas has a muscular appearance and a dark voice to go with it.
The blood of the crucified Christ was according to tradition collected in a vessel and that is what these monks do to the letter.  Wagner thought the Grail symbolized a life-giving force, “a spiritual counterpart to the Nibelungen hoard”. The prophesying Gurnemanz has brought Parsifal along to watch this Christ ritual and this manchild sits on the side open-mouthed drinking it all in. 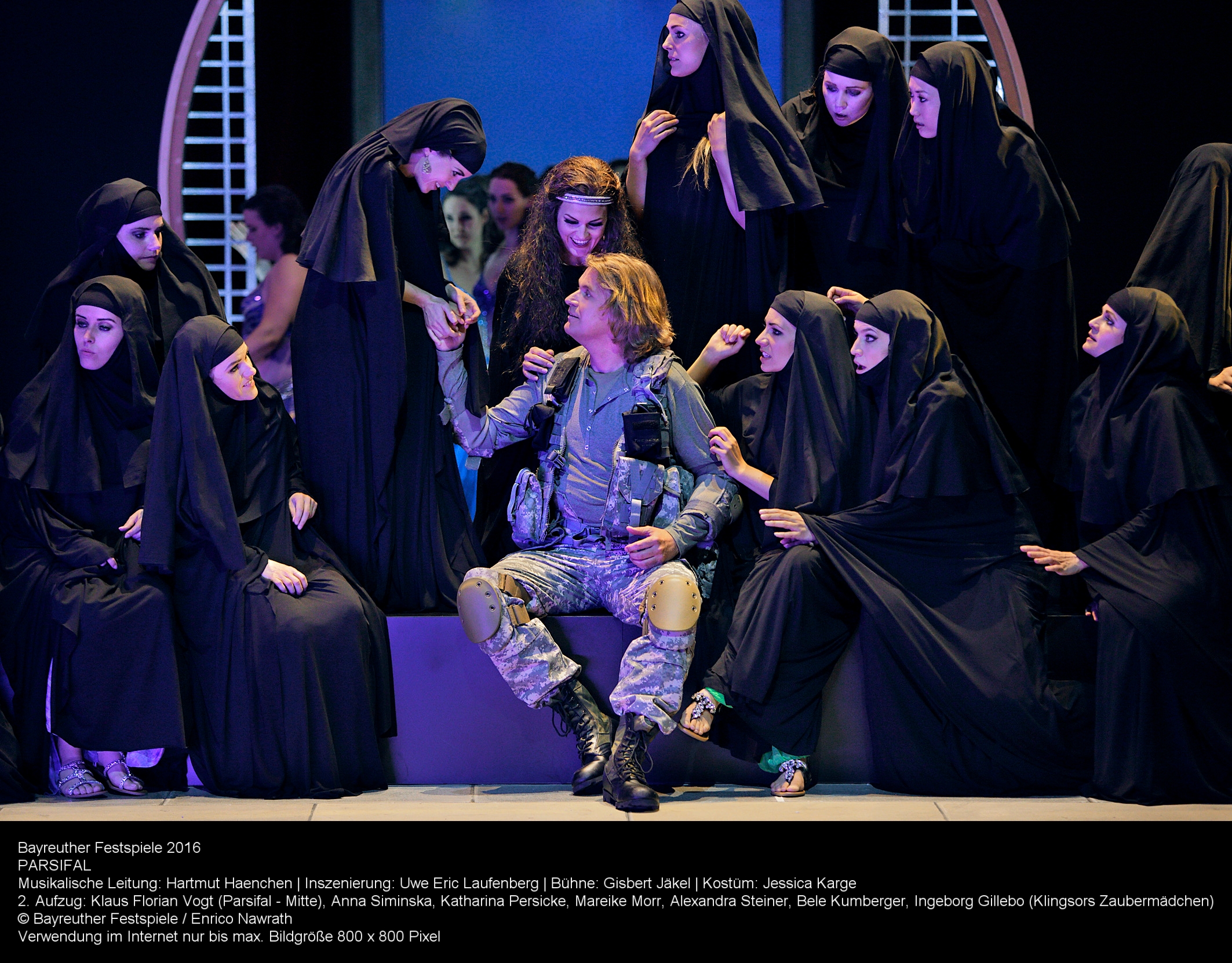 ACT II
In Act II we meet the dark magician Klingsor, who after being dejected  by the Knights of the Grail, conquered the spear that pierced Christ and wounded Amfortas. In this version Klingsor has taken Amfortas hostage and he has bound and gagged him to stop him from singing (because Wagner doesn’t give him a part in this act). Klingsor could be some sort of terrorist overlord or hate priest with a nice display of crucifixes and a penchant for self flagellation. Kundry is ordered by Klingsor to seduce Parsifal.
The second scene in Klingsor’s magic garden starts off promising. A whole bunch of women wearing veils covering head and chest enter. When the harem spots Parsifal they unveil slinky belly dancing costumes underneath their hijabs and the place turns into an Arabian wellness spa that would please any terrorist martyr pining for 72 virgins.The women’s attempts to ensnare Parsifal fail, but when Kundry re-appears (again dressed as a muslim) things change. Gone is the subservient Kundry who has been condemned to wander the earth in eternity because she mocked Christ on his Via Dolorosa. She has turned into Eve the temptress, the femme fatale who needs to rid Parsifal of his innocence to redeem herself and save her own soul. She reveals much about Parsifal’s past life that he didn’t know himself and when Kundry kisses him, everything changes. The kiss leads to an epiphany and suddenly Parsifal understands Amfortas’ and Christ’s suffering. This is also the moment the German director decides to introduce the ghost of Amfortas in the scene, for no good reason, other than that he gets to mount Kundry. 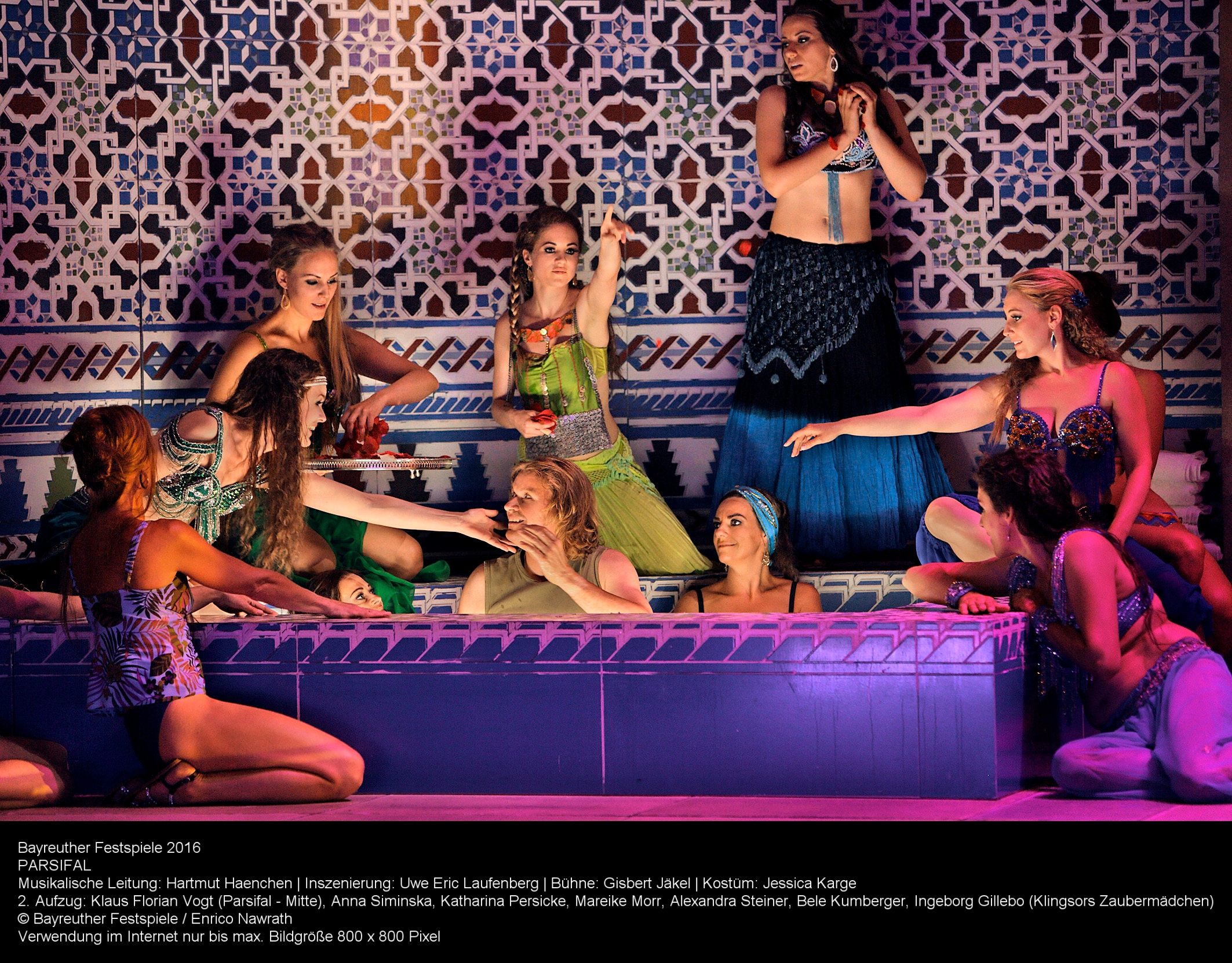 Wagner intended Kundry to be the one who embodies reincarnation (in the tradition of Buddhism) but you get none of that in this production.
But Parsifal rejects her and she curses him in return. When Klingsor is about to hurl his holy spear at Parsifal, he simply grabs it and breaks it.
ACT III
We are back in the monastery that we saw in the first act, but many years have passed and the garden is starting to make inroads into the church. Gurnemanz has aged considerably, but luckily his voice is still fine. Kundry looks worse for wear after having crept out of her hide under a scrapheap (that is what it looked like from a distance). Parsifal, dressed in Allied combat gear and armed with his broken holy spear, wanders in after having spent years trying to find Amfortas and the same place he visited in Act I ( clearlyGoogle maps doesn’t work here). Gurnemanz, who has become a hermit in a wheelchair baptizes Parsifal. Kundry’s only words in this act are: “Dienen…dienen” and Parsifal is the one she wants to serve. She washes his feet and in return is baptized by the new redeemer. Amfortas’ wound is healed when Parsifal touches it with his spear and the staging pretty much follows along predictable lines. There is one exception. At one point a bevy of beauties appear completely starkers in the background and have a communal shower in the garden. This is possibly referring to the return of the Garden of Eden, or maybe we just needed some light entertainment after Gurnemanz’s monologues.
Throughout the opera soldiers representing various religions and countries suddenly come rushing through scenes, to indicate that a war is going on, continuously.
In the end I am still none the wiser. Were the muslims the baddies? Surely not. But Kundry was for two acts dressed like a Muslim but ended up as Mary Magdalen.
So, Parsifal was possibly all the time a (clueless) Allied soldier, with a serious case of amnesia. Would that be the right conclusion? 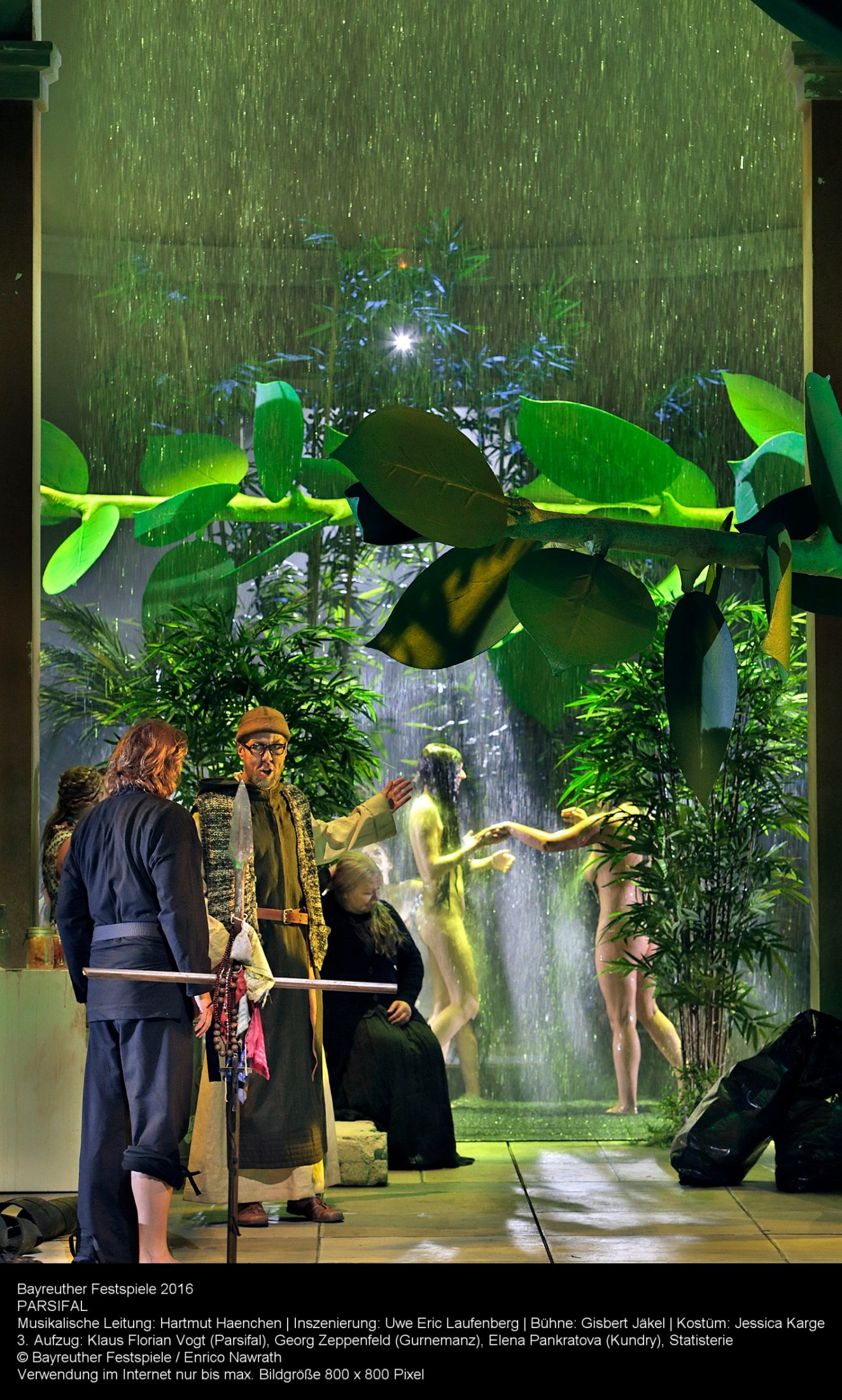 Elena Pankratova (Kundry) has the voice to threaten, heal, and be subservient, but when it comes to acting the sensuousness that is required in the second act, she is less convincing. The Flower Maidens sounded as good as they looked. The American baritone Ryan McKinney (Amfortas) gets a chance to show off that he has the six pack physique of a knight as well as a warm voice. He is also employed as a ghostly figure in act II. Gerd Grochowski (Klingsor) has to battle with a staging that could easily turn him into the pantomime ‘baddie’, but he manages comfortably to avoid the traps. Klaus Florian Vogt (Parsifal) is much loved in this part of the world but to play ‘the nameless youth’ as a wide-eyed naive boy is not particularly revealing. Vogt failed to shine on the second night and vocally he was not on top by the end of the long evening. On the evidence of what was on offer I would definitely have picked Gurnemanz as the new King, prophet and Redeemer. Georg Zeppenfeld’s bariton/bass here seems to embody the wisdom of all spiritual knowledge. I had heard Zeppenfeld the previous night effortlessly tackle the jealousy and forgiveness of King Marke (see review), but in the role of the prophet he even outperforms that effort and becomes the centre point of the production. Having said that, I do think that Hartmut Haenchen deserves the loudest applause and he got from the audience. What he has achieved in a short space of time is nothing less than miraculous. Never, other than in the preludes, was the music dominating the proceedings and Haenchen found an even finer balance to accompany the singers than Thielemann. What a marvelous ‘find’ Haenchen has been for Bayreuth.