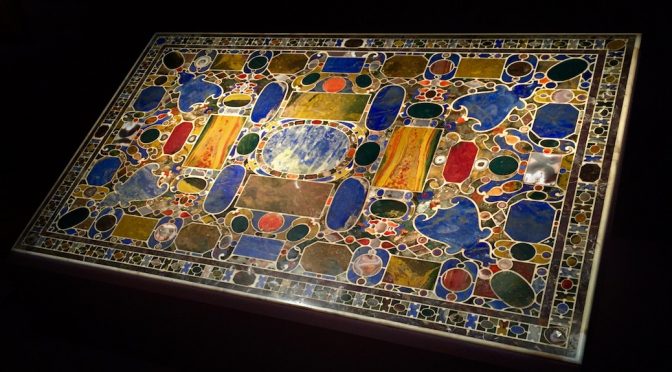 Behind the glass there are  some 12,000 orchids, buttercups and various other pink and white flowers that seem to drift in a nine metre wide cloud. Every year the entrance to The European Fine Art Fair  (TEFAF) in Maastricht  is turned into a horticultural masterpiece by Ten Kate Flowers. Visitors pose eagerly against this spectacular floral backdrop and the display is on a par with what is on offer at the fair.

In the run-up to the opening day of TEFAF (8-18 March), the Dutch papers were reporting quite extensively about the new arrangements. Instead of one preview day, there are now two. The newly christened ‘Early Access Day’ is reserved for super-VIPs with a maximum of 5,000 attendees. The second so-called ‘Preview Day’, sees 7,000 invitees inspect the antiques, modern and contemporary artworks on offer. In previous years the single preview day was the busiest of the whole fair with up to 10,000 visitors. But gallery owners complained that too many people were predominantly interested in the free finger food, the alcohol beverages and the party atmosphere. The buying public, serious collectors and museum representatives clearly became tired of having to slalom their way between finger-licking and wine-swigging attendees to get to the next booth.

The new chairman of the Tefaf foundation, Nanne Dekkinga, has introduced some changes that already have had an effect. From now on, only the privileged 5,000 that have an invitation for the first day will receive complimentary food and champagne, whereas the preview day guests just get the non-alcoholic beverages for free. It is up to the gallery owners, who hand out most of the invitations, to weigh up which clients deserve to be called VIPs. Inevitably the (second) Preview Day tickets will feel like ‘second rung’ tickets. The gallery owners  (who were complaining) have stopped complaining, because it turns out that sales were up for the opening day, despite some grumblings from B-list guests. (Somebody told me that many invitees on the second day are Dutch celebrities). Well, enough about this A- or B-list business and on to the real matters at hand:  some of my favourite highlights on offer at this year’s fair and a look at some of the sales that already have been achieved.

The 31st edition of Tefaf sees  275 dealers representing 21 countries. A few days before the fair starts nearly 190 experts grouped in 29 committees check every single object to make sure that it is what it says on the label. The vetting at Tefaf is extremely stringent.

J. Kugel takes pride of place and has done so at every fair since the Paris-based gallery started coming to Maastricht in the early 1990s.  They are a perfect representative of the exceptional standards that Tefaf likes to show off.  Alexis and Nicolas Kugel are the fifth generation of antique dealers that originally came from Russia. Antique furniture may have lost some of its allure but high-end antiques are still in demand and Kugel mostly offers museum quality furniture, clocks and objets de vertu.

This year their standout piece is the Bulgari Clock (pictured right), an ivory and silver-gilt astronomical clock (Augsburg 1637-39). It is a perfect example of a collaborative effort involving the work of goldsmiths, an ivory carver and a clockmaker. Depicted are the Seasons, the Planets, the Elements, Death, Venus as well as some other exquisitely carved reliefs. So here we are at the top end of the fair in one of the most prominent  booths. But straight away I’d like to take you to the far end of the fair where the tiny (11 m2) ‘Showcase’ booths are located.  The Showcase section is a platform for smaller galleries and a chance to try out a seat at the big table. The rare and antiquarian books dealer, Camille Sourget, is also Paris-based.  She has applied a few times in the past and  finally made the grade. The rent is relatively cheap at the far end (€8500 a booth), but the space is very limited. This hasn’t stopped Camille from creating a very inviting and colourful display for bibliophiles like myself. She shows me Abraham Ortelius’s magnificent ‘Theatrum Orbis Terrarum'(1570) atlas (€230,000). She has already sold William Lewin’s beautifully illustrated and fantastically titled ‘The Birds of Great Britain with their Eggs, accurately figured’ (1789-1794). It contains 232 original gouaches and sold in the region of €88,000. Two other volumes containing hand-coloured plates of birds have also found a new owner. Camille inherited her shop from her father; “because he didn’t have a son” she says laughing heartily.  Camille has had a very successful week and I am sure that she will try to get a place in the main section next year.  But she will have to consider if it is  worth the price (€100,000 a booth).

I always spend two days at the fair but never feel that I have seen everything. When I talk to colleagues they will always mention something that I have clearly missed, which can be quite frustrating.  But it was difficult to miss one of two van Goghs. I think ‘Lilacs’ (1887) is fairly unremarkable oil painting but admittedly the colours are very vivid and expressive. Hammer Galleries from New York sold it to a private collector for a sum in the region of €7.7 million.

Finally a couple of personal favourites from a long list. On Instagram (see pictures on the right)  I have already published a number of pictures of artworks that caught my eye.

Paul Gauguin stayed for nine weeks with Vincent in the Yellow House in Arles in 1888 . For a while they did feed off each other and van Gogh was particularly prolific, but it all ended when the unhinged Vincent sliced off part of his ear. The two leopards were probably studied by Gauguin when a Grande Ménagerie visited Arles. We know that Gauguin made several other sketches of exotic animals on that occasion. The sleeping Tahitian woman must have been added later. On the verso is a self-portrait in profile with studies of two Breton women.

The Tödlein (little death) figure in the picture below is dressed as a pilgrim. There are all kinds of creepy crawlies burrowing into his rotting and sinewy body. The Austrian Balthasar Permoser may have sculpted it around 1685. Munich-based Julius Böhler is hoping to get €850,000. This memento mori made out of boxwood was owned by the operatic baritone, Titta Ruffo, who was a colleague of the Great Caruso. Listen to his very solid rendition of O vin, discaccia la tristezza from Ambroise Thomas’s opera,  Hamlet, by clicking here  https://www.youtube.com/watch?v=TpC2v8VbQWI

Tefaf finishes on Sunday 18 March, but I will bring you another update before long.