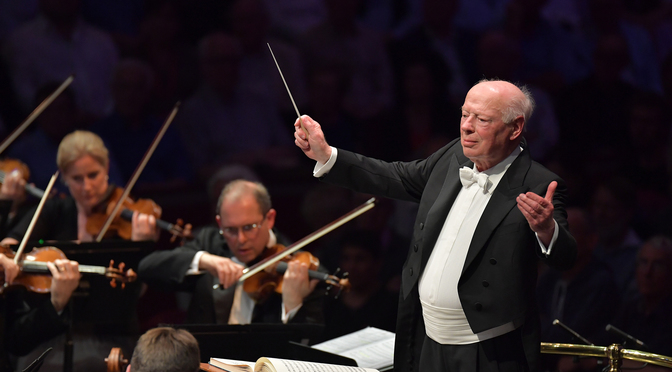 .Haitink helps the LSO reach its 'Gipfel' in Mahler 3

Bernard Haitink’s appearances at the Proms are one step ahead of his age.  At 87 the Dutchman has just conducted his 88th performance at the BBC Proms.  Age is clearly still no major physical hindrance, because Haitink continues to take on some of the grandest works of the symphonic repertoire. Gustav Mahler’s 3rd is according to the record books the longest symphony of them all and last night’s perfomance was just short of 100 minutes (without an interval!).

Haitink holds Bruckner and Mahler equally close to his heart. In the official guide to the Proms he makes this distinction between the two: “ Bruckner is a mountain. Mahler is sometimes hell. Bruckner is a steady ascent. Mahler’s music is down there in the depths and sometimes, somehow it climbs up to the peak.”
Mahler took it upon himself in June 1902 to conduct the first complete performance of the 3rd symphony – some of the movements had previously been premiered separately – at the Algemeiner Deutscher Musikverein in Krefeld (augmented with many musicians from Cologne’s Gürzenich orchestra).
He begun the work on the symphony in 1895 while on holiday  in a  guesthouse on the shores of Attersee lake. This was to be his most productive summer and five of the six movements and a few songs, not intended for the symphony, were composed in a tiny cottage overlooking the ‘See’.
The first movement was created the following summer and it cleverly sets off and incorporates elements of the consequent parts. On first impression it seems like too much of a good thing: military marches, folksy tunes, fanfares, popular melodies and Brahmsian quotes suggest a kaleidoscopic world without coherence.  Critics and many contemporaries of Mahler struggled  with the form of the piece.
Mahler himself  declared:” to call it a symphony is really incorrect since it doesn’t follow the usual form. The term symphony – to me this means creating a world with all the technical means available.”
The world premiere in Krefeld went swimmingly well, but when the work was performed in Vienna two years later many critics could just not make sense of it.

No such problems at the Royal Albert Hall which was jam-packed. The stage also looked crowded to the max with  a massive orchestra, the LSO women’s chorus as well as the Tiffin Boys’ choir. Haitink was welcomed with an ovation and he took it in his slow stride while flashing a big smile. But soon we were off with the nine note theme that Mahler clearly nicked from the finale of Brahms’s first symphony.
Mahler initially had titles for all the movements and the first one was “Summer  marches in”. Well, it is not my idea of Summer with goose step marches, hoompah phrases and plenty of brash brass. And then that extraordinary trombone theme that the composer instructed should be played crudely. It sounded rather too pretty in my ears.  It is tempting to let the pastoral passages slow the whole movement down, but Haitink kept a resolute tempo throughout. It isthe Dionysian qualities that have to prevail and the LSO succeeded and the movement came in at just over half an hour. The second movement was originally called ‘What the flowers of the meadow tell me’ and it was  performed separately before the premiere of the symphony. It is a blissful minuet and basically a set of variations, a carefully and lovingly constructed rondo movement.  In the third movement things again get more complicated. This was originally called ‘What the animals told me’ and there are bird calls and all kinds of animals of the forest scurrying away throughout  this movement. Shimmering violins and a couple French horns support the  ur-romantic posthorn that twice is heard in in the distance (off-stage). In this case it turned out to be a flugelhorn (not that I would have known). Trumpets shatter the idyll and we are thrown back into the underworld, where the primitive animals live.

In the 4th movement you can discover a trancendental spirituality, aided by Nietzsche’s verses. Sarah Connolly knows how to keep the voice floating above seesawing strings and immovable bad ass double basses. Wonderful stuff and Haitink Had some time conducting while resting on his bar stool.

After the God defying Nietzsche it was time for some folk poetry from Mahler’s favourite Das Knaben Wunderhorn. Connolly in the role of the sinner  faced the full force of the two choirs ( or angels) who reminded her of the ‘ heavenly joy that knows no end’. Yes, Mahler was a Jew but he also had a penchant for Christian rituals and in the final 6th movement he evokes in the choral Bach and Bruckner’s very Christian spirit.

But Mahler starts out by giving a nod to Beethoven’s final string quartet. The seamless majestic serenity that Haitink evokes from the LSO must be seen  to be heard. Yes, a recording doesn’t do this kind of magic justice. Ennio Morricone and many other film composers have been deeply inspired by this movement which Mahler could have given the title ‘what God’s love tells me’.

In the moment this sounded as perfect an interpretation of Mahler 3 as I could imagine, but afterwards I had one little caveat. The LSO members are all frightfully good musicians, but this symphony truly contains the whole world, and that includes the ( good) bad and ugly. The brute force of Nature should be more terrifying at times and perhaps a touch of the roughewn and a little edginess was missing at times.

I try to attend Haitink’s annual concert at the Royal Albert Hall and the Proms wouldn’t be the same without him.