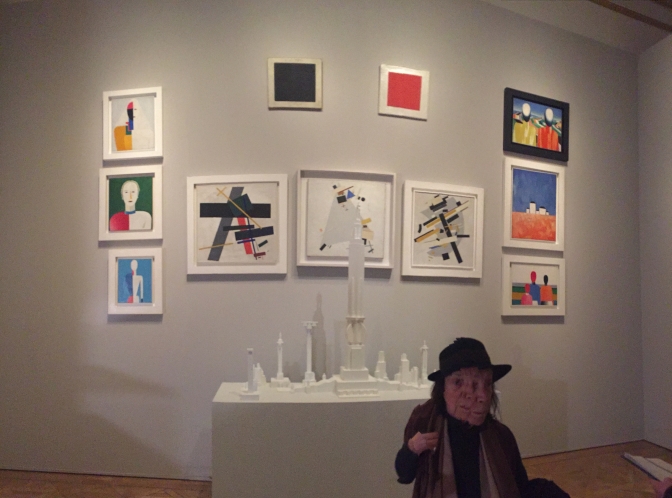 The 'Malevich room' from the 1932 exhibition recreated

Lenin was not particularly interested in art. And that is probably an understatement. Actually, he didn’t care one bit for it, unless it could be used for propaganda purposes and to him the artist was not more than a tool. Isaak Brodsky (1884 – 1939) was one of those perfect tools. He had been schooled by the most legendary Russian painter of them all, Ilya Repin. Repin’s portraits of famous writers and composers are well known from record sleeves and book covers. Brodsky on the other hand will forever be associated with his sympathetic (and a couple of them empathetic) portrayals of Lenin and Stalin that were (and are still) frequently used as illustrations in history books. On display at the Royal Academy are two of Brodsky’s famous Lenin paintings. In ’Vladimir Lenin and a Demonstration’ the dictator poses against a blood red curtain, while observing us and his fellow bolsheviks visible through a window down below. Our Vlad seems slightly amused by the painter’s attention and you wouldn’t know that by this time, a couple of years into the Civil War, he was already responsible for ordering the killing of tens of thousands of Russians. ’Lenin in Smolny’, showing the ’great leader’ busy writing with pen and paper, was produced 6 years after his death and his canonisation was already well under way. Molotov,  Stalin’s most loyal Minister of Foreign Affairs, supposedly said “ Compared to Lenin Stalin was a mere lamb”. Brodsky’s half-length of an almost friendly looking Stalin in moss green buttoned up jacket is also a sight to behold.

It is slightly horrifying to find so many portraits of totalitarian mass murderers in the first room of the Royal Academy’s current exhibition which celebrates the artistic achievements of the Russian revolution. In the second room (titled Man and Machine) there is also scarce evidence of great art. There are some examples of early social realism. Alexander Deineka’s rather wooden oils of women working in factories unitentionally shows the cruel realities of factory work in the Soviet Union. Women had been given equal rights, but it meant that they were also expected to pull their weight in the heavy industries. In two paintings by Deineka the women are only wearing a slip or singlet dress and no shoes. The female construction workers look pretty happy and muscular but the textile worker facing us is as thin as a reed and not looking too healthy (see picture below).

The propaganda photographs are historically important and they do manage to make machinery look sexy. It is just unfortunate that all those posing people in the pictures are so squeaky clean and unconvincing actors.

Early on the communists realised that photography and film were very effective tools . They could be multiplied and easily distributed for the masses. Artful banners and posters were also very helpful, whereas paintings, sculptures, statues and buildings required a site visit by the viewer. Artists could be helpful, as long as they stuck to the message. They had to fit into the party machinery.

It would be a mistake to think that Russia’s art scene only came alive thanks to the dynamic forces generated by the furious February/ March Revolution and then the less bloody coup in October/November 1917. Natalia Goncharova’s had already before the First World War started to paint her experimental fokloric and musical designs. Her life-long partner Mikhail Larionov was busy moulding futurism and cubism into his own abstract rayonist movement. Together with Léon Bakst they also worked on designs and costumes for the pioneering Ballets Russes. Igor Stravinsky changed the course of classical music with his Rite of Spring (1913) which was premiered in Paris. There were  many other artists and painters working on truly revolutionary art but many had made their home outside Russia. Wassily Kandinsky was one of them. He spent many years before the WWI in Germany but returned in 1914, full of hope.

When the Bolsheviks came to power they initially tried to persuade avant-garde artists to stay. And many did initially remain. People like Kandinsky, Chagall and Malevich believed a new dawn was beckoning. Out with the old guard, in with the new. But very soon it turned out that the new bosses wanted artists only to work in the best interest of the state. The first requirement was figurative painting and abstract art never got a foothold in the young Soviet state. Lenin’s taste was very conservative and the social realism that he advocated was clearly a few artistic steps backwards. The revolutionary movements that looked promising in 1917  stalled after a few years and by the time the civil war had ended (in 1921) very few artists were still daring to experiment or finding inspiration in the contemporary art movements in Western Europe.

Vladimir Mayakovsky put a very positive spin on the revolution as a poet, graphic artist and playwright. Suffice to say that he committed in 1930. The brilliant and very influential theatre director Vsevolod Meyerhold was also an enthusiastic supporter of the bolshevik cause and his biomechanics highly stylized theatre and scenic constructivism are studied in drama schools to this day.  he was executed by Stalin, who ignored his pleading letter, in 1940.