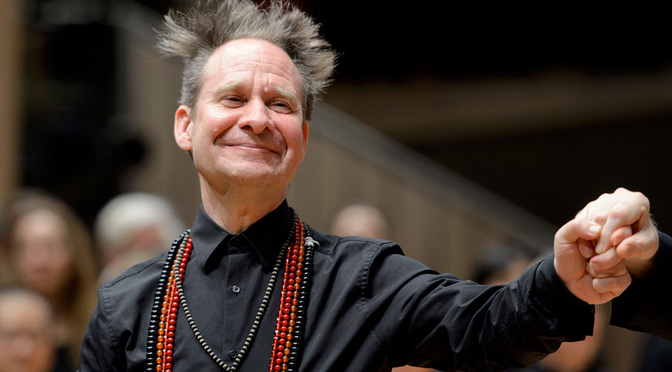 Sir Simon Rattle will this weekend ( 9-10 January 2016) lead the London Symphony Orchestra in a semi-staged performance  of Debussy’s only opera Pelléas et Mélisande at the Barbican in London. This is yet another collaborative effort between Rattle and the maverick director Peter Sellars. They did tackle the same work in the 1990s in Amsterdam and it has become the opera that Rattle has conducted the most.
Last month the same interpretation that we are about to see in London was performed in Berlin. Rattle’s wife, the mezzo-soprano Magdalena Kožená, sings Mélisande and the baritone Christian Gerhaher interprets Pelléas. The soloists in London are identical to the ones heard in Berlin but instead of the Berliner Philharmoniker Rattle will conduct the London Symphony Orchestra.
If the German reviews are to be believed this will be an intriguing experience and Rattle has pointed out that Debussy actually said that he wanted the orchestra to act as the forest and that Mélisande should die among the first violins. The opera, steeped in both impressionism and symbolism, is ideally suited to a fairly basic staging because the composer himself was hoping to created an opera in which outward events were merely hinted at.

Sir Simon is turning 61 on the 19th of January but when I met him in Berlin last year it was clear to me that he has no intention of slowing down any time soon. Rattle’s hair is now completely grey but it is still characteristically frizzy and his enthusiasm for new musical experiences hasn’t waned one bit. Listening back to his answers to my questions I became aware that he sounds like a man 20 years younger than his age.
My interview focused mainly on his interpretations of Sibelius’s symphonies with the Berlin Philharmonic (for more on this, see my previous two blogs). He has in the past recorded a number of the Finnish composer’s tone poems with the City of Birmingham Symphony Orchestra but I did wonder why he had never recorded the Finnish composer’s last orchestral masterpiece Tapiola? It turned out to be his favourite out of all Sibelius’s works, which makes it even more surprising that he hasn’t played it with the Berlin Phil. The simple answer is that he finds it hard to program this extremely dramatic tone poem.
“ I always thought this [Tapiola] was the most extraordinary piece. In a [BBC] Prom I played it, as people do, as an overture, but it kills whatever follows it stone dead. It almost requires a concert on its own. I can imagine now that it is maybe the first half for a Bruckner symphony. You can’t end a concert with it because simply everybody would throw themselves under a bus. It is like the end of the world.
This B major at the end sounds to me like a man saying : well, with this knowledge, how are you supposed to go on living? What can somebody do faced with what has just happened? That Sibelius had found a way where he relied on less and less material and that he had, to use an astronomical simile, taken a piece of material and made it into a white dwarf star where every tea spoon weighs as much as the earth. It is as if his composing collapsed under the weight of what he had achieved in Tapiola. In a way I am not surprised that he couldn’t go further. He had written himself into a kind of ideal corner. It is a real mystery piece but sometimes I think it is a piece to listen to in the privacy of your own home with earphones at midnight. Maybe it is almost not a public piece. But I would love to try it here [in Berlin] because this orchestra has the energy.
I now almost always end concerts with the 7th symphony but the idea of ending with Tapiola (breathes in) that should have a triple X certificate!!!”
After Sir Simon’s (overall) two very successful recorded Sibelius symphony cycles, it is about time to play the tone poems with one of the best orchestras in the world. I also challenged him to have a go at performing Kullervo, the ‘choral symphony’ that the composer himself sometimes referred to as his fist real symphony.
“ It is something  to be explored and you know I am only sixty! So if for nobody else, for conductors and judges it is young.”

In my next instalment Sir Simon talks about what he hopes to achieve with the London Symphony Orchestra when he becomes their principal conductor in 2017.