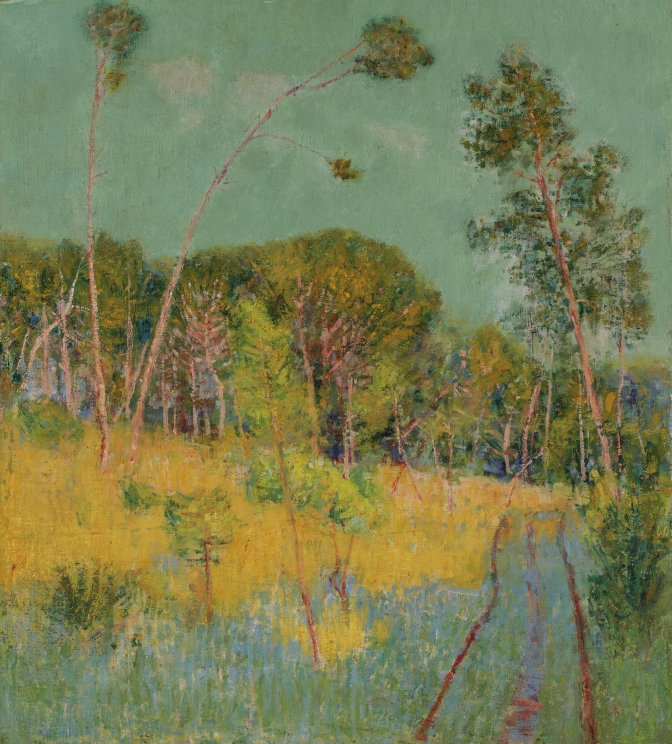 A Clearing in the Forest John Russell 1891

The context and inspiration for this exhibition is the fact that the National Gallery last year for the first time decided to display a painting by an Australian artist on a permanent basis. The Australians are making inroads at the NG in style with this special exhibition.

The work that last year was added to the collection is Arthur Streeton’s Blue Pacific (1890) which depicts the headland near Cogee Beach in Sydney. It was a popular spot for tourists and painters that loved to practice their trade in the open air. This work is a decent enough effort, but it is by no means one of the highlights of this long overdue exhibition.

Somewhat surprisingly the focus is only on four Australian artists : Arthur Streeton (1867-1943), Tom Roberts (1856 – 1931),  Charles Conder ( 1868 – 1909) and John Peter Russell (1858-1930).  But neither Conder nor Roberts  were authentically Australian; they came to Australia from Britain as teenagers. Conder actually only spent seven years  in Australia before he returned. Russell was  born and died in Sydney, but he lived and traveled for nearly 40 years in Europe.  He was the only truly impressionistic Australian painter and he also got involved with the avant-garde in France, which was reflected in his work. Russell is the only Australian who successfully embraced French impressionism but Aussie art historians have until fairly recently simply ignored him.  This exhibition proves that he was the most fascinating and talented painter of the lot.

A decade ago most Australian art history books still devoted a long chapter to the ‘Heidelberg movement’ which was considered to be more or less the Australian equivalent of French impressionism.  Recently Heidelberg has been more or banished as an art terminology. Why it was named after the Melbourne suburb Heidelberg in the first place, is a bit of a mystery. The artist camp that Roberts, Conder and Streeton set up was actually based in Box Hill (which has been swallowed up by Greater Melbourne). OK, they painted from time to time in Heidelberg.

Ten years ago the National Gallery of Victoria in Melbourne put together a  show under the banner of Australian Impressionism. The sheer size was was pretty impressive and I thought some of the best work clearly demonstrated a  burgeoning sense of nationhood expressed through landscape. But at the same time I was not convinced I was watching impressionistic paintings. Well, at least not in the French or even European sense of the word.  Yes, there was evidence of rapid, broken  brushstrokes and scenes of everyday life. But there was very little evidence in any of the 245 works of high keyed or primary colors. The lack of experimentation was also quite surprising. No one could have accused any of these artists of being anarchistic, unpatriotic or even particularly socialist (which were some of the accusations hurled at the French impressionist) in their depictions of nature or ordinary life.

The last French impressionist exhibition took place in Paris in 1886, but another three years passed before the first Australian event to be marketed as ‘impressionist’ was organised in Melbourne. In London we can now see seven small paintings that were on show at the original, artist-led  ‘9 by 5 Impression Exhibition‘ in Melbourne in August 1889. There are no works that would have shocked the conservative Australian public, but the fact that many were oil sketches and not finished works  irritated some critics. The title of the exhibition was derived from the size of the cigar boxes, roughly nine by five inches, and of course the French movement. But the manifesto of the young artists seemed to hark back to the ideals of plein air painters from the Barbizon school,  led by Jules Bastien-Lepage who was mainly active between 1830 and 1870. Bastien-Lepage had a huge influence on van Gogh, Monet and many Scandinavian painters. 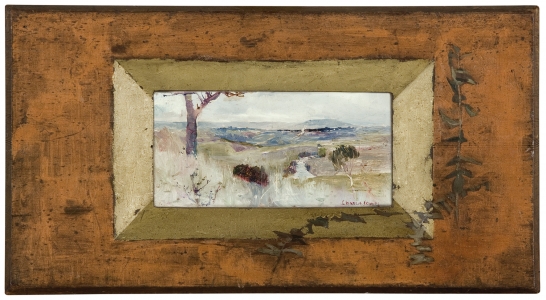 The seven oil sketches on show in London are  moody, tonal landscapes and streetscapes, clearly influenced by the work of the American James Abbott Whistler (1834-1903).

Tom Roberts returned in 1885 after a spell in Europe where he trained and soaked up influences in London,  Paris  and on his journey through Spain.  He had nailed his coulours to the mast of outdoors (plein air) painting and Whistler. It was Roberts who introduced his younger colleagues, who looked up to him,  to Whistler’s magic.

In Allegro con brio, Bourke Street West (1886) Roberts paints a dynamic picture of  ‘Marvelous’ Melbourne’s main drag.  With some fine detail, he records the dusty haze and the bustling street life in  one of the British Empire’s richest cities.  But he is at his most memorable in A Break Away (1891). The lunging jackaroo trying to stop a mob of thirsty sheep bolting towards a waterhole has a heroic quality.  In the next instant the sheep will crash into each other and in the ensuing crush many of the animals will drown, causing a great financial loss to the farmer. Here we see an early example of the ‘Aussie battler’, so beloved by today’s politicians. This picture became iconic because it shows a very Australian landscape, including parched grass, dusty road, sheep dogs  and eucalyptus trees.  Many of the artists working in Australia in the first part of the 19th century depicted the continent as a sort of exotic Europe, practically ignoring the local flora and fauna. The Heidelberg movement really tried to immerse themselves in the landscape and became pretty good at catching the unique light, the glare of the Australian sun in oils. But in general these ‘impressionists’ show a distinct lack of interest in typical Australian animals and plants.  Streeton’s ‘The purple noon’s transparent might‘ is pretty stunning but the title quotes a poem by Shelley. The pastoral dream that is depicted shows a land and river tamed and mastered in accordance with British imperial standards. As beautiful and serene as this scene is, in my mind there is nothing particularly Australian or impressionistic about it.

There is also a tinge of wholesomeness in some of these monumental paintings (and many are rather large). In Streeton’s Golden Summer, Eaglemont (1889) we see a shepherd boy standing in the late afternoon shadow looking out over a sun drenched field and a homestead a short distance away. It is evocative but also bordering on good ol’ Victorian schmaltz. Bear in mind that Streeton at this point had never set a foot outside of the federal state of Victoria. In Streeton’s Fire’s on you can see some miners bringing out the body of a  colleague on a stretcher. He has been killed in an accident while digging a railway tunnel. This is the cost of building the new Australia and many lives will be lost in this magnificent land in the name of progress. Yes, this Australian impressionism can get very sentimental.

In the last room of this fairly modest show containing 41 works you will find the real treat.  John Peter Russell was born in Sydney and thanks to a very generous inheritance from his father he could for many decades live comfortably in Europe without selling many paintings. He attended Slade School of Fine Art in London, where he befriended Tom Roberts, and continued his studies in Paris, where he came into contact with Rodin, Monet, van Gogh and many other now famous colleagues. The slightly older Dutchman encouraged Russell to be adventurous with colours and gave him more self-confidence. The portrait that Russell painted of Vincent in 1886 is apparently (and according to his contemporaries) the best likeness of van Gogh,  more accurate than any of Vincent’s selfportraits. Vincent wrote to his brother that he was very fond of Russell’s painting. This painting  can be seen at the van Gogh museum in Amsterdam.  They have also done more for Russell’s reputation than any Australian museum.  Until van Gogh’s death in 1890 Russell remained in contact  by mail. Russell had some years earlier moved to the island Belle-Ile, off the coast of Brittany, where the weather can get pretty wild. He married his Italian mistress Marianna and they had 11 children.  Not only did she model for him, she also sat for a number of Auguste Rodin’s sculptures.

Russell dares to play with colours and reality like no other artist back home. In his breakthrough work A clearing in the Forest (see the featured image) the palette seems to have been chosen almost arbitrarily, it is so out there.  The shadow falling onto the grass is turquoise and the  sky has also taken on an alien hue that should make you worry. But in the context of the composition it seems spirited and natural.

In Aiguille de Coton, painted on the island Belle-Ile, we see the needle rock from above and the horizon is just a slither. The outcrops seem to come alive with downwards spiraling double-quick brushstrokes, their glow powered by electric blue, purple and violet. The sea zig-a-zigzags and swerves like giant serpents away from the rocks.  The influence of Claude Monet, who came to visit and painted the same coastal motifs, is obvious. Russell in his turn tutored the young Matisse who visited the island thrice in the second half of  the 1890s.

Russell’s art developed and matured while moving towards post-impressionism. In the painting Rough sea, Belle-Ile (1900) he practically goes overboard in his eagerness to pay tribute to J.M.W. Turner.  This is fearless, immediate and improvisatory painting that borders on the abstract expressionistic. No Australian attempted anything as daring  and wild as this back home.

John Peter Russell never made it into the major impressionist or fauvist league. The worst thing is that he was forgotten by his fellow Australians. His beloved wife died in 1908 and Russell just lost his mojo, according to all accounts. He gave up oils and instead started painting luminous, but mostly decorative watercolours. He returned to Australia in the 1920s but showed no interest in the local art scene and by the time of his death in 1930 he was forgotten. When he was rediscovered some 50 years ago it was initially because of his friendships with much more significant French artists. And yet he still wasn’t considered Australian enough because he hadn’t contributed to the image that the Australians wished to forge of themselves.

Luckily John Peter Russell is finally being recognised by some experts and curators back home for what he was: the bravest and most talented Australian artist of the lot. And the only real Australian impressionist.  Go see if you love Australia!