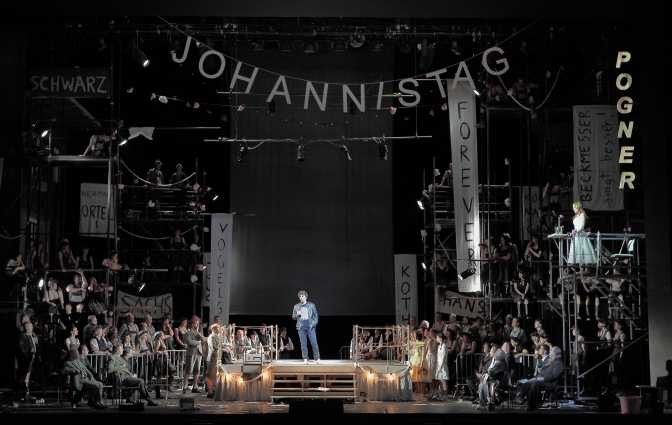 At the Festival theatre in Bayreuth, which was designed by Wagner, the orchestra and the conductor remain hidden from view. The point is that the audience should experience no visual distraction from the action taking place on stage. In the end Parsifal( 1882 ) was the only opera that Wagner composed with his new theatre in mind.

Die Meistersinger von Nürnberg premiered originally at the Nationaltheater in Munich (1868), which looked fairly similar to its present appearance (the opera house was destroyed and rebuilt after the war). I am pretty sure the orchestra pit used to be a fair bit lower. From my seat in the 7th row I can clearly see the back of conductor Kirill Petrenko’s head and even the hair and instruments of some of the musicians. To begin with it is a slight distraction but soon after Jonas Kaufmann’s entrance as Walher von Stoltzing I mainly have eyes for the singers and the set.

Bayerische Staatsoper is one of the best opera houses in the business and therefore they can consistently attract the most illustrious singers. It helps that Jonas Kaufmann is based in Munich and you couldn’t wish for a  better chief conductor than Kirill Petrenko. Usually I don’t like to make too much fuss about the stage director because their concepts too often get in the way of the music. But David Bösch is clearly a musical sort and he has conducted many productions in Munich. He marries the action perfectly to the music. No wonder he is now in high demand all over Europe.

The plot of Die Meistersinger von Nürnberg has much in common with the classic romantic film comedy. The young and handsome aristocrat von Stoltzing is in town to do business with the wealthy goldsmith Pogner. But Walther falls head over heels in love with Pogner’s daughter Eva and she is equally smitten by him. But it turns out that Eva is to be the prize of the city’s famous singing competition, which is sponsored by her father. Walther is keen to participate and win, but there are a number of other challenges he has to overcome before he can compete. The trials are to be held the next day and the young knight is not familiar with the complicated rules of the song contest. The pressure is on, but Kaufmann is a very laid back sort of Walther.

This being an opera by Wagner there are of course a number of other complications along the way. Shakespeare was a master of exploiting the confusion and farce that is associated with character and situation comedy. But even his plays can easily become tedious when they suffer a dull or particularly laboured staging. Die Meistersinger also runs the risk of becoming a drawn out affair (at 4h20m) if not handled with a good portion of humour. OK, it is not exactly LOL, but director David Bösch creates some very funny situations, particularly in the scenes with the foolish town clerk Beckmesser (Martin Gantner).

Bösch, his costume designer Meentje Nielsen and the designer Patrick Bannwart have set the action in modern times as opposed to mid 16th century Nuremberg. The look of the costumes (petticoats and suits) is ‘kind-of’ 60s and cars, a moped and other machinery have been added to the action. There is not a hint of ye-ol’-medieval half-timbered houses, instead we get a grey post-war housing estate.

Kirill Petrenko sets a fairly brisk pace in the opening prelude and the speed underlines the chatty character of the wind instruments. Petrenko is an unobtrusive conductor who never allows the orchestra to become overbearing and he has a brilliant ability to subtly underline both the thoughtful passages and the comedy. Yes, Petrenko blends the Bayerisches Staatsorchester’s sound with the singers as if he was conducting in Bayreuth.

Walther enters dressed in t-shirt and black leather jacket, carrying a guitar (case) which is enough to create a rebel image on an opera stage. Kaufmann does put a little bit of ‘devil-may-care’ attitude into his interpretation, slouches occasionally and smokes some roll-ups. ‘Am stillen Herd im Winterszeit’ gets a slightly low-key treatment and this Walther is clearly more about real life issues and experiences than ancient singing rules. Not long after that we are treated to a passion-packed ‘So rief der Lenz ’, Walther’s audition song for the Mastersinger Guild. But only Hans Sachs is impressed and despite the fact that Walther is a rival in the quest for Eva’s hand, the cobbler is prepared to help the aristocrat. Walter Koch is a steady, very straightforward Sachs. Sachs is meant to be the embodiment of poetry and Koch is maybe not exactly that but he certainly isn’t boring and his baritone can convey the tragi-sadness and enthusiasm that is required.He is truly moving in the third act’s soul searching  ‘ Wahn! Wahn! Uberall Wahn!’.

Eva (Sara Jakubiak) is certainly not a hippy rock chick. In this production she is a kind of small-town 1950s girl. Eva is quite a rare breed in the Wagner canon. She is not a goddess, a Valkyrie or  a saint, like Tannhäuser’s Elisabeth. No,  Wagner allows Eva to be a real woman.

Jakubiak is a young American soprano who has a very good set of pipes and, based on her current form, we will soon see in all the major opera houses. Emma Bell will sing the role of Eva when the production returns in September-October. I also greatly appreciated Benjamin Bruns’ comedic turn as Sachs’ pupil David, particularly at the start of the first Act. But it is Martin Gantner as the ridiculous Beckmesser who has the most memorable scene of act two. With the help of a cherry picker (sabotaged by Walther) he attempts to serenade Eva outside her bedroom window. Eva turns out to be Magdalene in disguise and her suitor David ends up beating up Beckmesser. There is some good clowning in this scene and the crowd scenes are also handled well. The chorus is never treated like “ a theatrical machine, made to walk and sing as part of the decor..”

Beckmesser was originally a caricature of an overzealous critic that Wagner couldn’t stand. Wagner possibly also intended him to be a character that people could associate with ‘Jewish traits'(yes, die Meistersinger was Hitler’s favourite opera), but there is of course no evidence of that in this production. Beckmesser is not unlike a bad XFactor or Idols artist and Gantner dressed in a gold lame jacket misinterpreting Walther’s song as ‘Morgen ich leuchte in rosigem Schein’ is a sight to behold.

Wagner provides Walther with an easy tap-in when he then gets to sing his own composition ‘Morgenlich leuchtend im rosigen Schein’ the way it should be sung. Kaufmann of course doesn’t fail to nail this aria to perfection and, lo and behold, he wins the competition. Oh, and gets the girl, naturally.

Interestingly Walther’s Prize song was written in medieval bar form AAB, two stanzas and an Abgesang. Wagner spent much time studying the standard handbook for a Master singer called  ‘Buch von der Meistersinger holdseligen Kunst’ (1697) by Johann Christoph Wagenseil.  Wagner stuck to the composition rules and used the titles of real songs, lists of penalties and mistakes and authentic expressions. The rhymed doggerel texts also reflect Hans Sachs’ language. Don’t forget that Sachs was a real person. In fact Die Meistersinger is the only opera by Wagner, besides Rienzi, that uses a realistic source.

The music is not inspired by the 16th century, but to find traces of Bach you don’t have to look too hard. The brawl scene is oddly enough a fugue and the quintet ‘Selig wie die Sonne meines Glückes lacht’ (Act III, scene 4) also uses Bachian idiom. This is when everything dramatically and romantically falls into place: Walther gets Eva, David and Magdalene are also united and Sachs accepts his lot. There is complex polyphony in this scene and many similarities with the quintet of the Siegfried idyll.

Wagner originally planned Meistersinger as a kind of comic sequel to Tannhäuser. Luckily he failed in that respect, but this is a very enjoyable production with some outstanding singers and one of the best orchestras and conductors in the business.

The next performances in Munich are Friday 30 September, Monday 3 October, Saturday 8 October 2016

The very exciting bass Georg Zeppenfeld (who I recently heard in two different productions in Bayreuth) will sing the role of Pogner.

One thought on “DIE MEISTERSINGER OF MUNICH WITH KAUFMANN”