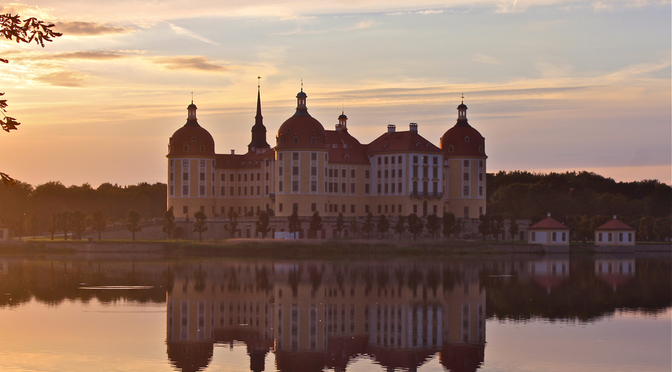 The other night the Moritzburg Festival kicked off at the Gläserne Manufaktur, Volkswagen’s transparent factory on the outskirts of Dresden. Unfortunately I can’t attend this year,  but I don’t mind doing a puff piece for a chamber festival that after 24 years deserves to be known by a much wider audience, not only because of the great musicianship but also the beauty of the locations.
The opening concert is the only one that takes place in the Saxon capital, all the other performances are held in elegant churches and a couple of splendid  castles no more than 1/2 hour outside the city.

The Baroque  Moritzburg Palace (see picture) , with its distinct four cylindrical corner towers, is the main venue for the chamber music concerts. The massive hunting lodge, extensively remodeled by Augustus the Strong in the 18th century, is surrounded by a man made lake that sets the stage perfectly. Last time I visited I took more than a hundred photographs of the exterior and interior of this and neighbouring castles.

“Every night I go to the concert there is a different light on the castle. I haven’t got tired of the Moritzburg Castle because it is a magical place”, says Vogler who has been the festival’s director since the 90s.
Vogler (52) is a world renowned cellist who at 20 became principal cellist at the Staatskapelle Dresden. He has been a very successful soloist for the last 20 years and records regularly for Sony. Vogler, who is based in New York, is in demand by top orchestras all over the world but spends every August in Moritzburg. He treats the festival as his time out, which to some people may sound strange, because apart from running the festival he is also involved as a performer.
“During the (concert) season most of us go to some orchestras and we have to inspire a large group of people in a short period and we do our recitals.”
But this itinerary concert lifestyle sucks the energy out of you, but Moritzburg is “a place to recharge the batteries”.
The idyllic rural setting is inspiring and there is time to hang out and discuss music with colleagues, as well as work in depth on pieces. The relaxed atmosphere also means that audience members feel that they can approach the musicians both before and after the concerts.
The first week a lot of attention is given to the Moritzburg Festival Academy, which was set up 10 years ago to support young artists. This year 41 students from all over the world are involved and the orchestra is led by the Spanish conductor Josep Caballé Domenech, who is music director of the Staatskapelle Halle.

I particularly enjoy the concerts in the Monströsensaal, where the walls are covered with leather hangings, decorative hunting scenes, huge mirrors and malformed (these are the ‘monströsen’) deer antlers. The palace contains some splendid interiors well worth exploring and the in Europe unique Feather room is something else ( it contains feathers of more than a million South-American birds!).

You can look at photographs of some of the interiors here: http://www.albertehrnrooth.com/img/Moritzburg%20Palace.html

Vogler always invites some musicians that he knows well to participate but he also makes a point of asking  people ha has never worked with before: “Sometimes the energy comes from new people because you feel you have to adjust. You have to be a bit more sensitive to their qualities. Some of the young players want to prove what they can do, they want to make a mark.”

Erkii-Sven-Tüür is this year the composer-in-residence and three of his works will be performed with the Estonian in attendance.

The core repertoire are the classics, but Vogel strives “to put them in a new light”.

When I confessed to Vogler that I (during the season) don’t go very often to chamber music concerts and actually prefer opera above almost everything else, he reminded me that “Chamber music is the most temperamental and dramatic music composers created.”

So, there we are. If it is drama you require Moritzburg  is the place for you.

The website of the festival can be accessed here: http://www.moritzburgfestival.de/en/welcome.html