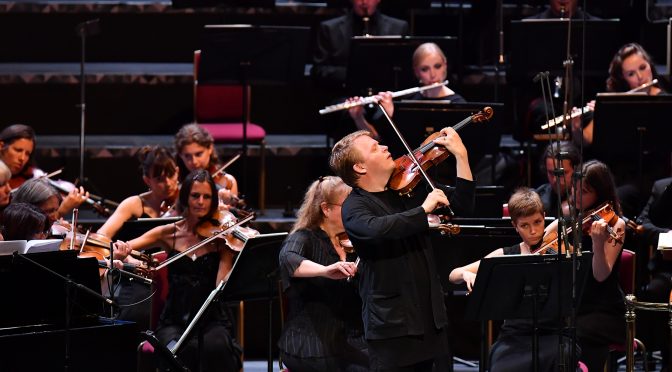 It's tough going when you have to do those Sibelian double stops. Pekka Kuusisto knows the highs and lows. Photo: Chris Christodoulou

Where did Sibelius find the wonderful, hummable themes and melodies for his violin concerto and his fifth symphony?  The Danish conductor Thomas Dausgaard wanted to explore the possible connections between the two Sibelius compositions and the Finnish, as well as the Finnish-Swedish folk music tradition. Dausgaard approached Timo Alakotila,  a well-known Finnish folk musician and expert in that field, to work on two preludes that perhaps could point to similarities and original sources.

It is true that Sibelius studied folk music and he traveled quite extensively in Karelia to hear the old runic singers and the local musicians. But he later denied that there was any direct connection with folk music in his tone poems and symphonies, despite some titles indicating a link. We can more or less ignore the maestro’s denial because the journeys that he undertook would almost certainly have inspired him but maybe he was too proud to admit it. But Sibelius never used ethnographic methods unlike composers like Grainger and Bartok. Alakotila doesn’t claim that Sibelius cited any specific folk song in the works presented, but it is true that you can distinguish certain scales and rhythms that are common in traditional Finnish music.

Minna-Liisa Tammela, Ilona Korhonen and Taito Hoffrén began by singing some wordless tunes and something reminiscent of a herding call. Alakotila accompanied on the harmonium (which is still widely used in Finnish church and folk music) and Vilma Timonen added even more typical Finnish sounds with her kantele, a small harp-like instrument that is played horizontally. The violinist Pekka Kuusisto improvised in fiddle style but would suddenly ‘jump’ into passages from the violin concerto with the orchestra joining in. There was a a snippet from a Swedish hymn (Gud fader helga denna stund, etc.) and a polka that suggested a link, but musically it wasn’t a wholly convincing argument. Who cares? It was certainly a more satisfying and smooth way of introducing the violin concerto than kicking off the evening with an overture by, say, Beethoven or a piece by Tchaikovsky.

For a long time the Sibelius family didn’t allow performances of the original (and later discarded) versions of the master’s works. Why should they? None of the first versions are better than the final product. But today we are interested in sketches, demos and alternative takes. The family already relented in the 1990s.  We didn’t get the very first version of the violin concerto which is a little but unwieldy and features a long cadenza in the style of Bach (admittedly Leonidas Kavakos has managed to make it all sound rather wonderful) . In general it is thought that the very first version had too many ideas and lacked focus.

Sibelius gives in this second version the solo violin in the opening measures ample space and doesn’t specify a rhythm. Kuusisto doesn’t go hell for leather, as many of his colleagues do. He happily sticks to the ‘dolce e espressivo’ that Sibelius suggests in the first movement. Kuusisto carefully builds up a whole world with dark undertones in the first movement. The main theme is repeated in progressively darker tones. Sibelius wrote parts of the concert while battling severe alcohol abuse. Which is not to say that anything feels like a hangover, but Kuusisto is not afraid to touch on the painful bits. There is virtuosity but probably nothing that Sibelius himself couldn’t have played. In his youth he  nearly reached the level required of a solo violinist. While composing he would on his violin try out passages at night, to his wife Aino’s delight. A century ago many top violinists struggled with the last movement’s virtuosity but  Kuusisto made it sound like a piece of cake. This is what a cake full of flavour sounds like.

Pekka favours a sweet, intimate, at times almost hesitant tone in the romantic second movement. The violin virtually dances in the rapturous third movement and it never sounds like ‘a polonaise for polar bears’, as the critic Donald Tovey put it in 1936. The darkness displayed in the first movement is successfully exorcised. I just wonder if Kuusisto has listened to Ginette Neveu’s classic (and quite slow) take on this concerto from 1946? It won the composer’s approval and I think ‘Sibbe’ would have been pretty happy with Pekka’s interpretation as well. Kuusisto delighted the audience with Sibelius’s a deeply felt Humoresk nr 4 for violin and orchestra as an encore.

The fifth symphony started off with a similar prelude to the violin concerto. Again it was quite interesting but not really particularly revealing. The folk musicians did their ‘tradidadidadi’ and the kantele plucked away at a familiar theme from the symphony, Another snippet from a Swedish-Finnish song was heard and then before we knew it, without the familiar opening of French horns and the timpani we had seamlessly gone into the first movement.

It is interesting to learn that the BBC used a passage (which one?) from this symphony as background music during the live broadcast of the moon landing 50 years ago. It is maybe not the kind of music we associate  with lunar music today (Pink Floyd, Brian Eno or other synthesizer music comes to mind), but the original version of this symphony must have sounded pretty ‘far out’ or ‘spaced out’ to the earliest audiences. It is not as comfortable a listen as the final product.

Sibelius conducted the work himself on the occasion of his 50th birthday. It took at least three years to put together a first version and he actually started working on the sixth symphony some time before before the fifth was finished. It is odd that Sibelius started tinkering with the symphony and changed much and shortened it considerably, because the first version was welcomed enthusiastically.

The ur-version (1914-15) has four movements and the first one seems to end in mid sentence.  And then the second movement also ends as suddenly. In the final version (1919) the first two movements were dovetailed. The third movement seems to have more pizzicato plucking than the final version and there is definitely not the same orchestral  lushness. The fourth and last movement is more grand and sounds even in modern ears at times disconcertingly dissonant. The 16 swans that Sibelius at one point saw doing a flyover while he was composing the last movement have over the decades been analyzed in minute  detail. I think that every swan has consequently been identified and named. OK that is a lie,  but the swan theme is firmly in place in the original, with some extra dissonances, and it returns towards the end. The real surprise comes at the very end.  The brass continues playing until the end and there are no rests nor timpani providing an explosive ta-boom!

All the BBC symphony orchestras  are now so good at playing  Sibelius, maybe thanks to the various Finnish conductors that regularly lead them, and the BBC Scottish Symphony Orchestra, that used have the Finn Osmo Vänskä as their chief conductor,  is no exception.  The high standards of the BBC orchestras remain impressive.

Kuusisto came on for another encore and did what he is now  expected to do every Proms season: he got the Royal Albert Hall (packed to the rafters for this event) to hum along to a Finnish folk tune. Kuusisto is a very popular man with Proms crowd.