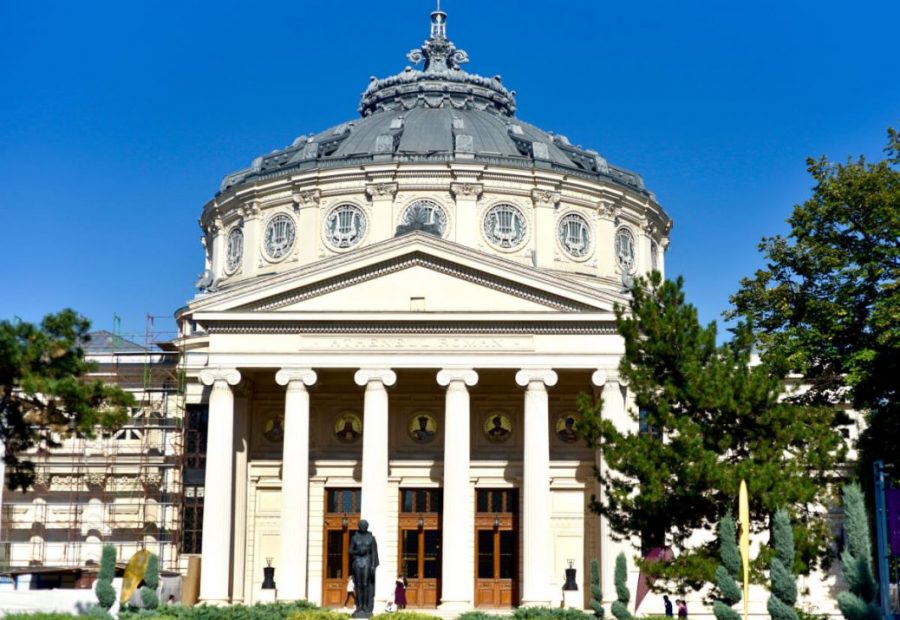 Ateneul Roman or the Romanian Athenaeum, a gem of a concert hall. photo: Albert Ehrnrooth

Bucharest is not a place you fall in love with straight away. It might take a few days. Or, as in my case, a return visit.

Seventy years ago the monarchy was abolished and instead a Romanian People’s Republic was proclaimed. 43 years later the first democratic elections were held in Romania. The communist era had a devastating effect on Bucharest and many other cities and villages.  Nicolae Ceaușescu’s dictatorship  (1965-’89) initially could count on tacit support from the West. But as the leader’s policies  became more and more outlandish  and the secret police secured an iron grip on every aspect of society,  it seemed only a matter of time before something had to give. Ceaușescu ordered the destruction of thousands of villages and flattened whole neighbourhoods in Bucharest, replacing them with soulless blocks of flats and offices. It will take at least another generation before the ugliest edifices have been pulled down. Meanwhile they have a function in housing people and gathering pollution.

There is one fantastic exception from the communist era that deserves to be preserved: the Palace of Parliament, Ceaușescu’s crazy project that was started in 1984 and never finished. There may be no administrative buildings (technically it should not be classified as a palace, as it has no bedrooms) on you bucket list, but this has to be seen to be believed. There are more than 3000 rooms, taking up 330.000 sq. metres. Only the Pentagon is bigger. But only a megalomaniac with an inferiority complex could have ordered a building like  Palatul Parlamentului. Yes, Nicolae and his horror of a wife both were very involved in the design and many of the details. Book the full tour and take some time to contemplate the  views from the balcony. This could be the HQ of Orwell’s 1984 or Huxley’s Brave New World.

There are a number of other places in Bucharest that are well worth a visit. No, I am not very keen on the Historic Centre and the Old Princely Court area with all its restaurants and bars. The streets are narrow and during the summer months the terraces take up half the space. During the weekend the throng of tourists and locals pushing through this area I find unbearable.

For a more relaxed atmosphere I recommend the area between the Romanian Athenaeum and Bulevardul General Gheorghe Magheru. Here you will find several good restaurants serving ‘honest’ Romanian food (La Mama is a good example).

I do have a soft spot for the National Art Museum which used to be a ‘real’ Royal Palace. It houses the country’s largest art collection in two separate galleries. I particularly recommend the medieval collection. The 19th century palace, with a 1930s façade stuck on to it, looks out over the Revolution Square. Cross the busy Calea Victoriei, walk past the Rebirth Memorial without reflecting too much on the quality of the work and pause a moment in front of the former Central Committee of the Communist Party building. This is where more than 100, 000 Romanians in December 1989 were forced to listen to, what turned out to be, Ceaușescu’s very last speech. The masses quickly became unruly and the leader was completely taken by surprise by the people’s loud protestations. It all happened on live television. Nicolae and his wife Elena had to withdraw while the police and the military that night mowed down more than 1000 demonstrators. The next day the dictator again tried to address the crowd but was jeered and fled in a helicopter with his wife. Four days later they were executed after an unanimous and anonymous court decision.

To the west of the Interior Ministry (the former Central Committee building) you will find the very impressive Romanian Athenaeum (1888), which probably is Bucharest’s finest building. Reading about it, I get the impression that it was designed by a whole host of architects and advisers. But the Frenchman Albert Galleron gets the final credit. A number of different styles have been incorporated for good measure. Amazingly it is a very good mix. The façade with its lean ionic columns supporting the pediment suggests Greek temple, the dome says baroque and the circular auditorium seems to indicate that we are in a circus. This is Romania’s premier concert hall. The impressive marble entrance hall is spacious and palatial. Four spiral staircases made of Carrara marble lead up to the concert hall on the first floor. There is seating for nearly 900 people and the acoustics are surprisingly good for this slightly odd concert space. The richly decorated vaulted ceiling and the monumental fresco on the circular wall certainly will keep you occupied should the performance not capture your imagination. The fresco (1933), relating the history of Romanian peoples in 25 painted scenes, is hardly a masterpiece, but certainly worth a few glances during a concert. The fresco starts with the Romans and the Dacians reminding us of the roots and rich heritage of the Romanians. The 75 metres long and 3 metres high painting ens with the unification of the Romanians.

During the biennial Enescu festival this is definitely my favourite concert venue. There is much to be said for a visually attractive venue . It enhances the musical experience.

In Bucharest stunning buildings are few and far between, but the Ateneul Roman is a gem and a gift to all the people who are looking for a holistic concert experience.