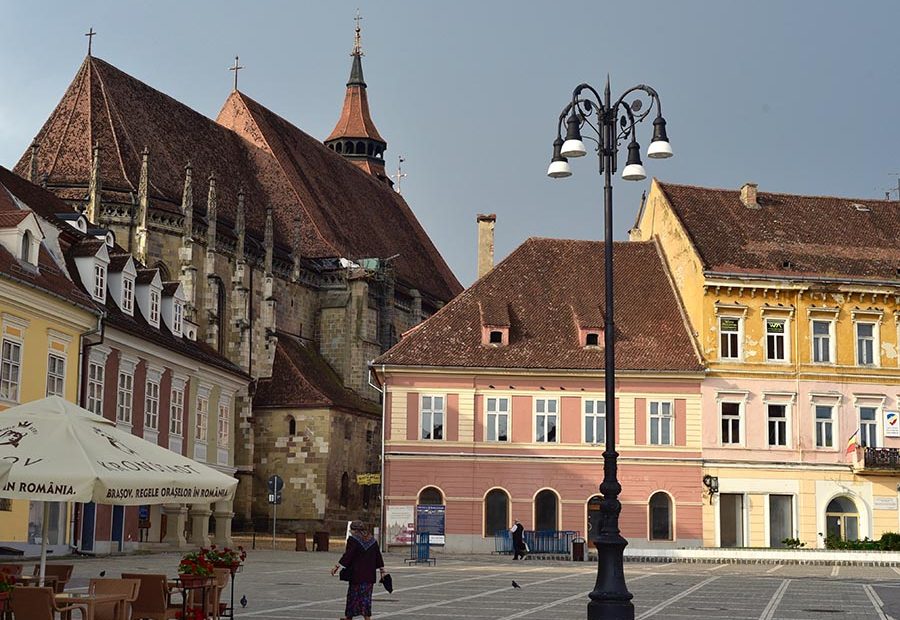 Does the city of Braşov need the white Hollywood type of sign up on Mount Tampa? Not really, it can boast a far more interesting history than the sleazy capital of film. Transylvania’s second city is perhaps slightly lacking in confidence in its own tourism product. It shouldn’t, the place is worth a detour.

The Romans called the site Corona and when the Saxons settled in medieval times they named the town similarly in German, Kronstadt. This translates into Brassó in Hungarian. Transylvania was part of Hungaria before the war. In 1950 Braşov was rechristened Orașul Stalin (Stalin City) by some communist committee. Vlad the Impaler had 40 noblemen skewered and displayed on the local mountain, but he was a pussy compared to the Soviet dictator who was honoured here. In 1960 the local Romanians came to their senses and renamed the city Braşov. This is also the city where some of the first fierce protests against the Ceaușescu dictatorship were aired.

Braşov lies at the foot of Mt. Tampa (940). Its top can be reached by cable car or opt for an easy ascent. The Germanic people started in the 15th century the construction of the impressive wall around Braşov. A large part of it is still intact. Walk the path along the outside of the western section of the fortification, next to the stream. Climb up the stairs to the White Tower which offers a splendid view of the old town. From up here the Council House (1420) with the Trumpeter’s Tower in the centre of the square is the most eye-catching building. More interesting and dominating the skyline is the Black Church (Biserica Neagră). It is a German Lutheran church and exceptionally large for this ( mainly Romanian Orthodox) region. It was damaged and charred in a fire in 1689, hence the ‘black’ in the name. You do not have to be interested in religion to be able to appreciate the very unusual collection of Anatolian and Transylvanian rugs that were donated by wealthy merchants over the centuries and now decorate the interior. The organ (built 1839 by Carl August Buchholz) is also special and there are regular concerts.

The centre of town with its shops, restaurants, narrow passageways and colourful façades is pleasant enough for a slow afternoon stroll. But the most genuine Romanian part of Braşov is the Schei district. Head past the 15th century Weavers’ Bastion, take note of the Kronstadt cemetery with German war graves from the First and Second World War and continue in southwesterly direction. During many centuries of Saxon rule Romanians were not allowed to live within the walled city. That is why the orthodox St. Nicholas Cathedral is in the Schei district outside the fortifications. The church was closed when I visited but there are a number of (faded) murals painted in Byzantine style on the outside and the carved wooden door is also a minor masterpiece. Next to the church is a 16th century school where the pupils for the first time anywhere were educated in Romanian. The charming church area, the grave-yard, the school and the small square with typical stylish Romanian architecture offers some tranquility, away from the very touristic old town. This is perhaps the most genuine corner of Braşov. For a hearty, traditional and very affordable meal in a rustic setting I recommend Casa Romaneasca in Piata Unirii (Union Square) which also gives you a view of the St. Nicholas Cathedral.

Next day I decide to skip the trip I had planned to Bran and the ‘Dracula Castle’. Yesterday’s taxi driver (see previous blog) has put me off and I really need to visit Sinaia. This resort is on the train line back to Bucharest. I summon a taxi to take me (back) to the station.

This time I have a silent driver. I reckon he is in his sixties. Judging by his driving style he used to be a police officer. He seems to think he has a right to move past a minor traffic jam on the wrong side of the road, ignoring the solid white line and the oncoming cars that have to make way. I am sure this move felt a bit safer in the days when he could flash his blue police light. I also notice that he crosses himself every time we pass a church on the way to the train station. That happens three times and a fourth time he crosses himself from right to left (as is the orthodox way) after he has nearly taken out a car on a roundabout.

When he drops me at the station, he allows himself a smile and utters “Goodbye”. It is probably  the single English word he masters and the only smile he gives out professionally.