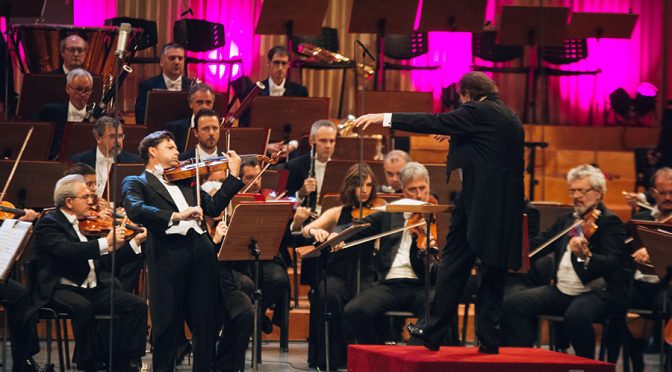 Julius Rachlin rips it up with Chailly and his Filarmonica band providing the accompaniment. Foto Alex Damian

The biennial Enescu festival is a classical music fest with a difference. In my previous blog I have tried to explain why it is so unique and absurdly grandiose. In that sense it is reminiscent of the Palatul Parlamentului ( Ceaușescu’s monstrous monument to megalomania). Of course I realise that it is very unfair to compare the largely empty Palace of Parliament with the very busy and ambitious Enescu Festival. The former is a pipe dream on an unbelievable scale, completely at odds with the poor state of the country (during the communist era). The Enescu festival is, when it comes to the quality of the performers, an absolute dream. If this event would be organised in London or New York people would be queuing for returns for hours.  In Bucharest they almost seem to take it for granted that you can sometimes hear three top orchestras and soloists a day within an area of 500 m2.

The orchestras and soloists that are invited to the festival are all requested to play a piece composed by the man who lent his name to the event. It is a clever concept which means that the visiting symphony and chamber orchestras usually also perform that same work in their home country. It guarantees in a way that Enescu’s works every other year get some extra exposure around the world. In my previous blog I already explained that the quota of world famous names is extremely high. One reason that the Romanians manage to attract so many stars might be that the festival takes place in September, just after the plethora of summer festivals have finished and just before the new concert season kicks off properly.

I flew in on a Friday afternoon to Otopeni and the drive into the historic centre took about half an hour. I was sharing transport with a Canadian-Iranian percussionist who I was to see in action the next day. This was my second visit to Bucharest so I knew what to expect. There is a distinct lack of glamour and charm, but most aspects of the actual Festival function perfectly. If you base yourself in the centre of town somewhere around Revolution Square (Piața Revoluției) you will have no problem walking to all the four main venues where concerts take place.

Most of the concerts featuring symphony orchestras are held at the Sala Palatului which is an ugly remnant from the heydays of communism built in1960. It was built as a conference centre but this century is has mainly been used as a concert hall. The acoustics are, not surprisingly, pretty appalling but some improvements have been made over the years and the situation is now passable. Some years ago the number of seats were cut from 4000 to 3000. One of the problems is that the stage and the hall are far too wide, but as long as you can get a seat in the centre stalls or up in centre circle the levels are reasonably balanced.

The Filarmonica della Scala led by their principal Conductor Riccardo Chailly dealt with this acoustic problem by fielding a massive orchestra. They started off with their ‘obligatory’ Enescu piece, in this case one of the composer’s most performed works, Rhapsody no.2 in D major op.11 (1901). The first Rhapsody is heard more often because it is ebullient, danceable, folky and very easy on the ear. The second rhapsody has a more reflective character. Its point of departure is a popular ballad which after a slow and quiet development moves into a contrapuntal stage while borrowing from another folksong. Past the halfway mark there are signs of increased activity but in the end we return to the quietness of the countryside. This was all handled with poise by Chailly and the Filarmonica, but I must conclude (and I own an early Romanian interpretation of the work) that this piece doesn’t grip me. I don’t consider it to be one of Enescu’s most interesting works.

It has been pointed out to me that Béla Bartók is as Romanian as he is Hungarian. The town in the Banat region where he grew up became part of Romania in 1920, so many decades after he moved away (make of that what you like). Bartok’s viola concert, SZ 120, BB128 had not been finished by the composer when he died of leukemia in 1945. It was completed by his friend Tibor Serly but there are also a couple of other editions of the work. Which one was presented at this concert wasn’t made clear. The festival’s programme leaflets are, how shall I put it?,  severely spartan.

The Lithuanian violinist Julian Rachlin had a music stand in front of him with some notes but he was perfectly prepared and there was no sign of uncertainty. Maybe he had written out third movement cadenza This is a work with moments of great agitation and difficulty. The odd folk tune makes an appearance ( a Scottish one is heard in the 3rd movement rondo)and the principal bassoonist gets a starring role in the 2nd movement. The viola concert contrasted with and was at the same time compatible to the earlier Enescu piece. Rachlin and Chailly had it all under control and it is interesting to consider that the concerto was composed at the same time as the 3rd piano concerto (which was the last work he finished).

But for me the highlight was Respighi’s Fountains of Rome and Pines of Rome.The  cascading fountains were presented first and this rendition came close to picture postcard perfection with boosted colours. The Fountains of Rome start very quietly and then gradually work their way up to pompousness. The Pines are even more fun with playing children, ghouly catacomb music, offstage trumpet and flugelhorns (or buccines), an organ, a singing nightingale and finally a whole legion of Romans marching along Via Appia. The orchestra and Chailly clearly cherished this kind of theatricality and being at the centre of the action on stage, instead of down in the pit at La Scala, made for some very precise playing. To top it all we were rewarded with a rousing encore. The overture to La Forza del Destino brought a smile on the faces of quite a few of the musicians and the roar of the audience afterwards even took the performers and conductor by surprise.