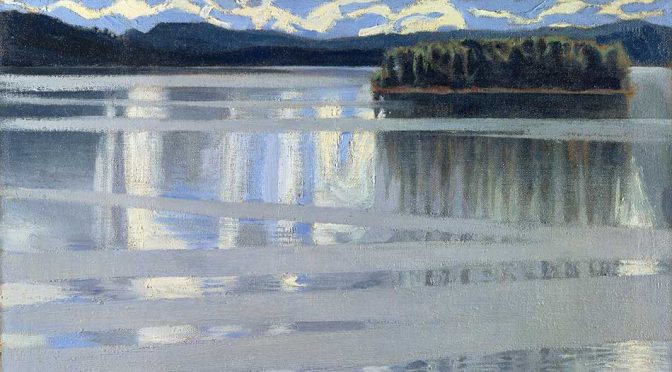 Axel Gallén's Lake Keitele (1905) may seem like a straightforward lake view, but there is much more to it. National Gallery, London

Review of exhibition Lake Keitele, a vision of Finland at National Gallery, London. Until 4 February 2018.

Have you ever heard of the Finnish artist Axel Gallén? Or does Akseli Gallen-Kallela (1865-1930) ring a bell? I am impressed if you recognise one of the names, because Axel and Akseli are one and the same person. I’ll explain later.

Outside of Finland and Sweden Akseli Gallen-Kallela is today virtually unknown, but a century ago the respectable Uffizi Gallery in Florence commissioned his self-portrait. He was considered to be Finland’s leading artist and internationally reasonably well-known. Together with the composer Jean Sibelius, his exact contemporary and friend, Gallén was also seen as one of the major contributors to the narrative of the awakening Finnish nationhood. But after the Finnish Civil War (1918) Gallen-Kallela’s work became uneven in quality and he found it hard to adapt or even appreciate all the new and modern styles of painting that conquered the major capitals of Europe.

The National Gallery, (NG), in London has two excellent reasons to draw attention to Gallen-Kallela. The museum acquired in 1999, a very fine landscape,  or more correctly lakescape, by Axel Gallén. It remains the only Finnish work in their collection. The second, and most important, reason for staging this exhibition at this point in time is the fact that it coincides with the centenary of Finland’s independence (6 December, 1917).
The National Gallery’s exhibition ‘Lake Keitele, a vision of Finland’ is staged in room no.1 and can be visited for free until 4 February 2018. There are thirteen works on display and in all of them a lake features in one way or another. There are four paintings with the title Lake Keitele and they all depict the same subject, except for some minor variations. The picture owned by the NG is, despite it not being the first version, the finest of the four.  Painted in 1905, it shows a panorama view of a lake with an island in the middle ground and the opposite shore in the distance. The sky is barely visible but it is mirrored in the water. Intriguing and slightly mysterious are the diagonal and geometric patterns caused by the wind on the vast expanse of water.
You could admire this image like a perfect picture postcard of a Finnish lake at the height of summer. And yes, it is first and foremost an ode to nature. But the sun is shining but the blue and green colours are not particularly warm, so perhaps something else is going on as well? The cool and silvery colours and the sense of isolation hint at a Symbolist message.
Axel Gallén (officially – he changed his name in 1907 to Akseli Gallen-Kallela,  had previously painted a number of works that suggested an allegorical voyage. The island Haapasaari in the Lake Keitele picture would have reminded many contemporary people of the famous painting Isle of the Dead by the Swiss Symbolist Arnold Böcklin. Prints of the painting were mass-produced and it was a common sight in many middle-class homes.

Another factor that needs to be taken into account when looking at Lake Keitele is Axel Gallén’s interest in the Finnish national epic, Kalevala. He painted many scenes from that collection of poems in the 1890s which established him at home as a firm favourite. His international recognition came in 1900 when some of his furniture and fabrics were exhibited in the Finnish Pavilion at the Paris World Fair. His four Kalevala-themed frescoes made a big impression as well and he received two silver and one gold medal for his works.

The Kalevala was put together in the 1830’s by the physician and linguist, Elias Lönnrot, who made many field trips to Finland’s most eastern province, Karelia. He gathered many ancient songs and poems that previously had only been passed on orally. We can’t be sure how much of The Kalevala consists of traditional material and what Lönnrot made up himself to construct  an overarching story resembling a creation myth on a legendary scale. (Lönnrot had gathered stories and poems on his many field trips that weren’t all necessarily part of the same narrative. ) After the publication of The Kalevala in 1835, it was very quickly recognised as the most important work written in the Finnish language. It also gave the Finnish independence and language movement a strong sense of identity.
Akseli Gallen-Kallela, as he is constantly referred to in the exhibition, kept returning to The Kalevala myths throughout his career (with the exception of the years he spent in Africa).
There are no figures in the Lake Keitele paintings but Gallén (the only name with which he signed these works) hinted that something else was going on, apart from a  view of a beautiful lake in the middle of Finland. Gallén stated that the steel-grey geometrical patterns across the lake, caused by wind and underwater currents, also suggest something else; the traces that Väinämöinen’s copper boat has left. Väinämöinen is a wise hero with an enchanting singing voice and magical powers . He is also forever on the look-out for a wife. So, we are to assume that Väinämöinen has rowed past several times in the picture, leaving silvery wakes up and down the lake. If that interpretation was what Gallén intended, then so be it.

There is a third, ‘nationalistic’ interpretation of the Lake Keitele painting. Listen to the curator of the exhibition, Anne Robbins’ explanation:

Finland was still part of the Russian empire (until 1917), but as an autonomous Grand Duchy (the Tsar was in principle Grand Duke and not Tsar in Finland); Finland retained a reasonable amount of independence and its own Diet (legislative assembly). Tsar Alexander III started to change all that by trying to force Slavic values on the Finns. This Russification process intensified under Nicholas II and began to seriously undermine Finland’s autonomy. Nationalist movements grew rapidly and various political parties, that previously had had little in common, now found common ground in their resistance against the Russification campaigns. I could write a number of blogs on this subject (see also my previous blog), but in this context I just want to reiterate that Gallen-Kallela was seen as the foremost artistic representative of the nationalist movement.

The exhibition includes an early stained glass design which contains a fairly obvious political message. It shows a massive white rose (Finland’s heraldic symbol) rising over a lake landscape. The title alone, Rouse Thyself Finland!, would have given the authorities a fair idea of what the subject is realy about. T

The rest of the paintings are mainly decorative, but there is a lovely portrait of Axel’s wife, Mary Slöör (see picture above) with Lake Keitele in the background, which provides evidence of the fine portraitist that Gallén was.

This small, but informative exhibition begs the question; isn’t it about time for the National Gallery to devote a major show to  art from the Northern countries?