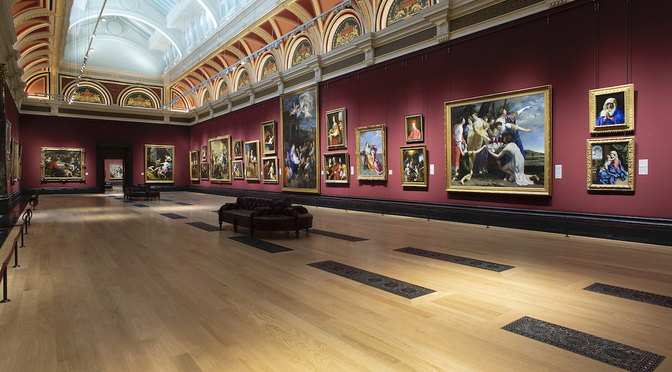 The refurbished Hans and Julia Rausing gallery contains many Baroque masterpiece, including a newly acquired self-portrait by Artemisia Gentileschi © The National Gallery, London

Do you think you know London’s National Gallery? Think again. The museum has reopened, now that the worst of the coronavirus pandemic is deemed to have passed. But all visitors are still expected to wear a face mask. You will have to book your ticket in advance, but the main collection can still be visited free of charge.

But nothing is like it was before. Yes, most of the same old pictures are still on display, but you can no longer crisscross between galleries. You have to choose and stick to one of three marked out routes and follow the arrows in a one-way system. So what will it be today? Route A is for renaissance masterpieces by the likes of van Eyck, Leonardo, Michelangelo and  Raphael. Or B?  starting in Venice and moving on via Hogarth, Gainsborough. sidetracked by Holbein only to end up with the impressionists. C is my flavour of the month with Caravaggio, the Flemish and Dutch masters, Monet, Turner and van Gogh among the highlights.

The National Gallery’s central location has in the past made it an ideal place to kill some time between appointments. Quite frequently I would nip into the museum to study four or five paintings. The three new routes literally changes your perspective: you’re now offered a sort of self-guided, curated tour around the galleries.

I found this to be a very positive experience, because beside my favourites, I discovered works that I previously hadn’t taken notice of.

There are also a number of new acquisitions, loans and rehangs that deserve special attention. Most importantly the largest gallery space in the museum, room 32,  is now, after a 21-month refurbishment, ready to impress. The room’s decoration (see featured image above) has been returned to its original 1870s design , including twenty lunettes with dolphins and winged lions supporting the names of great masters. The gallery is named after Hans Rausing, the Swedish Tetra Pak billionaire, and his wife Julie who contributed £4 million to the refurbishment project.

The Rausing gallery is packed with Baroque paintings by masters like Caravaggio, Guido Reni, Guercino and Orazio Gentileschi. The latter painter’s The Finding of Moses (1630s) is now a permanent part of the collection. The large painting has been on loan to the museum since the 90s but was acquired  for £22 million in December.  A little bit too mannered and theatrical to be called a masterpiece, it is still worth searching out for its exquisite depiction of silk fabrics and baby Moses looks like a real wriggling infant.

King Charles I invited Orazio to Great Britain in 1626 and that is where he died 13 years later. His daughter Artemisia joined him in 1638 to assist with the ceiling paintings that were made for the Queen’s House in Greenwich.  Artemisia Gentleschi (1593 – 1654) was a great talent in her own right and the National Gallery had planned to celebrate her work in a major exhibition that  was due to open in April. The COVID-19 virus killed off the plans, for now. In the Rausing gallery Artemisia’s self-portrait has a place on the opposite wall of her father’s depiction of the basket case Moses.

In 2018 the National Gallery bought Artemisia’s Self-portrait as Saint Catherine of Alexandria for £3.6 million in July 2018. Saint Catherine’s left hand is resting on the wheel with the horrid spikes that crushed her. Artemisia was also subjected to torture during the  trial against the man who raped her, the painter Agostini Tassi. But in the role of St. Catherine Artemisia shows no sign of emotion. Many of her paintings have been interpreted as a response to the unfair rape trial , but this representation doesn’t seem to qualify. Unless….. this portrait is meant to depict her submission to the ethical doctrine of the Stoics. They tried to free themselves of emotional involvement and pain.

Charles I  is surely the British royal that even up to this day can claim to have contributed most to his country’s artistic life. His magnificent collection of Flemish, Dutch, German and Italian paintings was unfortunately broken up and sold off by Cromwell, but some masterpieces were later bought back by Charles II.                    The National Gallery’s conservators  and scientists have quite recently finished the cleaning and restoration of Anthony van Dyck’s enormous Equestrian Portrait of Charles I. The discolouration and aberration in some  key areas has been restored and retouched and this slightly effete royal has regained some dynamic flourish.  It’s not up there with van Dyck’s other equestrian portrait, Charles I with M de St. Antoine,  which can be seen at Buckingham Palace (well, that is if it opens again over the summer months!). But this, in places almost sketchy, swagger portrait is certainly worth a detour.

So even if you think you know the National Gallery well, reconsider and book your ticket for a new passageway and pleasantly surprising walk through one of the world’s greatest collections.