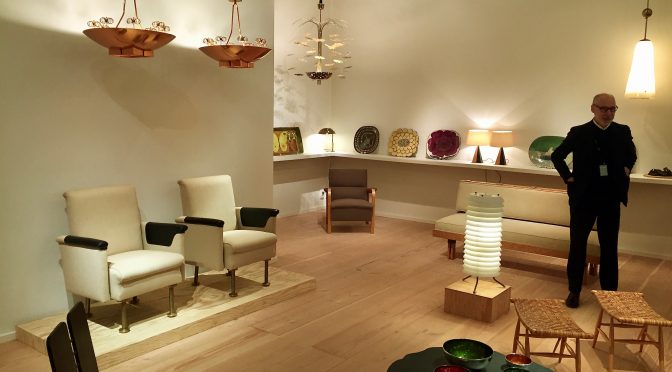 The Paris-based Eric Philippe, who can be seen in the picture, devoted his whole stand to Finnish design, photo: Albert Ehrnrooth

In the good ol’ days every Broadway show had weeks of previews out in the sticks. The European Fine Art Fair (Tefaf) only needed two previews to get it right. TEFAF Maastricht, 8-18 March 2018, see also my previous blog.

Despite some early grumblings the new arrangements that Tefaf Maastricht put in place turned out to be a resounding success. The Early Access Day (8 March) and the following (admittedly less prestigious) Preview Day setup led to an increase in sales and more room for serious collectors, museum curators and myself to have a look around. The corridors of the exhibition space were  slightly widened, which also was a subtle improvement.

The positive feedback from the exhibitors was essential, but a pleasant bonus was the fact that the number of museum representatives visiting the fair also reached a new high. Which other antique fair can claim to attract some 300 curators and representatives from the world’s most prestigious museums? On top of that some 60,000 paying visitors came to Tefaf over the nine days that followed the previews.

In my previous blog I already mentioned and posted a picture of ‘Lilacs’ by Vincent van Gogh which was sold by Hammer Galleries. It probably became the fair’s most expensive artwork selling for a sum close to €7,7 million. The magnificent Bulgari Clock, which I also featured previously, is likely to have come a close second on the top sales list. Rumour has it that it sold in the region of €7,5 million. It remains guesswork because a few galleries are sticking with their opaque policy of not revealing prices. When it comes to transparency there is still room for improvement at Tefaf . A couple of gallery owners have told me that their insurance company stop them from publicising prices. In that case we need to get on to the insurance companies.

In this final blog about the Tefaf art fair I will look at some Scandinavian artworks that were on offer in Maastricht.

‘A trunk and pine trees, landscape at Hyvinge’ (1914) by Helene Schjerfbeck (€ 220,000) was offered by the Munich dealer Daxer & Marschall. Helene Schjerfbeck (1862-1946) is undoubtedly Finland’s most well-known artist. She studied in France, and briefly also in St. Ives. She was influenced by the Symbolist movement, but Cézanne, Manet and Degas also made an impact on her work. This oil and charcoal painting (see picture) was made in the artist’s home town of Hyvinge, where she had moved in 1902 together with her mother.

The delicate composition with the pink tree trunk in the foreground is reminiscent of Japanese woodblocks. But where had I seen this picture before, quite recently? A little googling did the trick. It went  under the hammer at Uppsala Auktionskammare last June for €80.000.

The same gallery also had a very fine interior by Vilhelm Hammershøi (1864-1916). It is a reasonably early work (1895), painted before his grey-toned, tranquil scenes of home life became almost over-familiar.

The maid setting the table has a dynamic air about her unlike all those reading and contemplating women in other Hammershøi pictures. This painting has an interesting provenance for Swedish readers. The writer and publicist Olof Lagercrantz used to own this work. The price: €650,000.

Dickinson displayed a slightly intriguing,  small-scale portrait of  Queen Christina of Sweden (1661) by Wolfgang Heimbach. Christina is posing with a crown and orb, while holding some sort of baton.

Slightly curious because she had abdicated and moved to Rome seven years before this portrait was painted.  Kristina, that was the spelling of her name before she converted to Catholicism, was among many other things an avid art collector. She received a stash of priceless paintings when the collection of the Holy Emperor Rudolf II was seized by the victorious Swedes at the end of the Thirty Year War in 1648. She continued to add to that collection and acquired works by among others Raphael and Titian. Unfortunately this treasure  was dispersed.  According to London–based Dickinson this painting has been in the same collection for a long time and was last exhibited in 1966.

Helmer Osslund was deeply influenced by synthetism, a style closely associated with Paul Gauguin. Osslund’s panorama landscapes depicting beloved views in the (old) northern province of Ångermanland remain popular, at least in Sweden. Galerie Michel Descours did manage to sell Osslund’s expressionistic Before the storm (1910). I am not sure if the Swedish art  gallery Åmells sold Osslund’s more typical and autumnal View from Storberget (see second picture from the top).
This year Verner Åmells’ pièce de résistance was Cleopatra (1883) by Julius Kronberg, which until recently hung in a Swedish manor house. Its size and theatricality makes it ideally suited as a backdrop for an old fashioned touring production of Händel’s opera Giulio Cesare or a revival of a 1898 actor-manager production of Shakespeare’s Antony and Cleopatra. Gazing up at the vast expanse of canvas I am not too surprised that Kronberg is today largely forgotten, but many Swedish people have unwittingly seen his work either at the Royal Palace, Hallwylska Museum or the Royal Dramatic Theatre in Stockholm.

Åmells also offered Inferno, painted by the writer August Strindberg’s. This work now seems to do the rounds as it was auctioned only last year at Bukowskis for €1,9 million. We are given a visual glimpse of the author’s inner demons. He wrote an autobiographical novel (in French initially, not Swedish) titled Inferno in 1896-97 and the painting was  conceived a few years later.

Axel Törneman’s full frontal nude ‘Modell i blått’(1915) appeared at Ambrose Naumann’s gallery.  I should perhaps mention that at Uppsala Auktionskammare the hammer price for this quite attractive painting (the breasts were surely modeled after bowling balls?) last year was 26.000 SEK (€ 2,500). And that price came in  below the estimate. I am not sure what Ambrose is playing at, but he is offering the blue model for $30,000. Ambrose is the son of the well-known art dealer Otto Naumann (who has retired).

No Finnish gallery has ever exhibited at Tefaf, despite the ever increasing popularity of classic 20th century Finnish design. I spotted ceramics by Birger Kaipiainen’s and Paavio Tynell’s lamps in at least three different galleries. Paris-based  Eric Philippe is an early devotee of Finnish furniture. This year he devoted his whole stand to eleven Finnish designers. He was particularly proud of the two chandeliers (see picture) by Tynell, pointing out that only three pieces were ever produced. Eric declined, with a perfectly charming smile, to reveal the price for the pair.

TEFAF New York Spring will be at Park Avenue Armory,  4-8 May