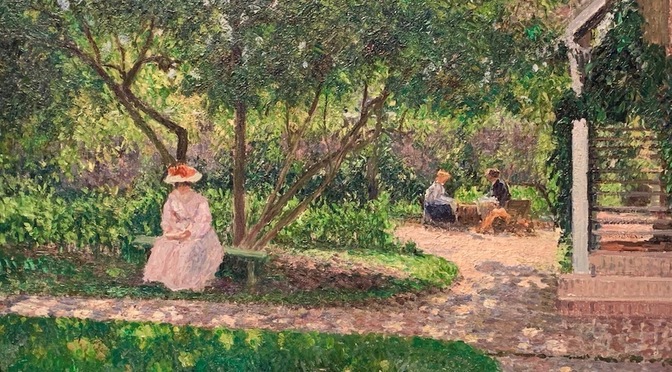 A Corner in the Garden, Éragny (1897) sums up summer and impressionism. Pissarro's eyesight was already failing when he made this perfect rendition of dappled light in his own garden.

Gauguin and the Impressionists, seen at the Royal Academy of Arts, London (until 18 October 2020)

Pictures from the Danish ‘Golden Age’ of art (first half of the 19th century) and Vilhelm Hammershøi’s understated, almost stark interiors have this century become quite desirable outside of Scandinavia . Copenhagen is today the (very expensive) capital of cool for foodies and design buffs. Tourists have also finally discovered that the Danish capital has a number of art museums of outstanding quality. If it is 19th century French painting and sculpture you’re after the Ny Carlsberg Glyptotek, next to the fabulous Tivoli amusement park, should be your first port of call. Ordrupgaard is almost up there with Glyptoteket when it comes to classic Danish and French art. The fact that Ordrupgaard is situated on the outskirts of Copenhagen means that fewer foreign visitors find the time to explore this very fine museum. If you are in the UK, the time is now to see Ordrupgaard’s splendid French collection, as the Danish museum is temporarily closed. The Royal Academy of Art in London is the last stop of the touring exhibition ‘Gauguin and the Impressionists’, consisting of 40 mainly French works from the Hansen collection which is housed at Ordrupgaard.

Around the turn of the 20th century Denmark had a number of very keen art collectors. The owners of the Carlsberg brewery, the Jacobsens, were both wealthy and knowledgeable, but Wilhelm Hansen (1868-1936) was perhaps a more systematic and interesting collector. Hansen had made a fortune in the insurance business and had amassed an impressive collection of Danish paintings by the time he discovered 19th century French art. During his regular visits to Paris for business he found time to familiarize himself with the recent French ‘repertoire’; everything from the Barbizon School to the Post-Impressionists. In the decade before the First World War  impressionist paintings were becoming very collectible and prices were starting to rise at an alarming rate. But the Great War dampened the enthusiasm to spend big on art and as the conflict dragged on, without an end in sight, prices plummeted. Denmark managed to remain neutral, but Hansen could no longer travel to Paris. In 1916 his advisor, the well connected French critic Théodore Duret, pointed out that a number of first-rate works had come on the market for bargain prices. Edouard Manet’s unusual still-life Basket of Pears and Delacroix’s Ugolino and his Sons were among the early acquisitions (and feature in the exhibition). Three years later Hansen’s collection was already so impressive that when he returned to Paris he was welcomed “like a little god” by the local dealers.

At the turn of the century Paul Gauguin would  have been one of the more familiar impressionists in Denmark, thanks to the fact that his wife was Danish. Gauguin and Mette Sophie Gad had five children and in 1884 the family moved to Copenhagen. Paul tried to make a living as a tarpaulin salesman in Denmark but lacked the luck, the skills and  the will to make it work. He abandoned the family a year later and moved back to France to concentrate on his career as an artist. After he settled in his Tahitian ‘idyll’ in 1891, and took three teenage brides,  he seems to have given little thought to his wife and children in Europe.   After the war  Hansen created a consortium with another collector and a few dealers which enabled them to finance some major purchases. This way he managed to get his hands on a number of superb Gauguins. Eight of them feature in this exhibition and for me the highlights are The Little One is Dreaming (1881), an early master-piece, and the rather bizarre (or disturbing) Portrait of a Young Girl.

Understandably the Royal Academy decided that the works by Gauguin form the main pulling power for this exhibition, hence the title. The impressionists are well-represented with a few key works: Sisley, Monet, Renoir and Berthe Morisot get to show off some good and strong paintings. But the two Manets and two ( out of a total of six) Pissarros top my list.  Pisarro’s A Corner in the Garden, Éragny (see featured image above) is a masterclass in impressionistic painting and it also comes close to depicting how I remember the summers of my youth.

Yes, the impressionists are worth the visit, but so are the more sombre works by the Barbizon School and Jean-Baptiste-Camille Corot’s realistic works. I was particularly drawn to Eugene Delacroix’s portrait of George Sands  which implies both exterior and interior movement. This oil painting’s unfinished character adds to its immediate appeal. The writer’s contours are slightly blurred, but her eyes are clearly closed. She is listening intently. Her hands have been placed very distinctly in the foreground. Perhaps her fingers are tinkling the ivories in her imagination and she is mimicking her lover’s playing. Sadly Frederic Chopin has been cut out of what originally was a double portrait and we are now just left with Sand’s reaction to his piano playing. If you want to see the other half of the painting you need to visit the Louvre, just like Wilhelm Hansen would have done  during his many visits to Paris.